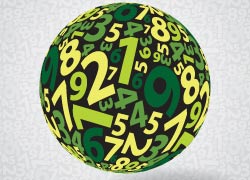 In a previous article we discussed the concept of being a “level headed trader”, we looked at support, resistance (the three levels thereof) and the daily pivot. There is also another incredibly important level which forex traders must monitor with constant vigilance, we’d term it the “big round numbers” level.

Most traders accept that retail traders do not “move the market”, the majority of the total forex volume is transacted through approximately ten banks. These banks are the brand names that we all know including: Deutsche Bank, UBS, Citigroup and HSBC. Deutsche Bank is the largest foreign exchange dealer in the global market place with a market share of circa twenty one percent. Best estimates put the volume of retail trade at less than five percent.

Each bank is structured slightly differently, but most banks will have a separate group known as the Foreign Exchange Sales and Trading Department. This group is responsible for making prices for the bank’s clients and for offsetting that risk with other banks. Within the foreign exchange group, there is a sales and a trading desk.

The sales desk is generally responsible for taking the orders from the client, getting a quote from the spot trader and relaying the quote to the client to see if they want to deal on it. This three-step process is quite common because even though online foreign exchange trading is available, many of the large clients who deal anywhere from $10 million to $100 million at a time (cash on cash), believe that they can get better pricing dealing over the phone than over the trading platform.

This is because most platforms offered by banks will have a trading size limit because the dealer wants to make sure that it is able to offset the risk.

The last paragraph describes how institutional level forex trading works, it also sheds a light on just how far removed we are (as retail traders) from their decision making. They blaze a comet like trail through the sky we get to sit in the coma they create and attempt to pick off a few small pieces of matter that fall out of the gravitational pull of their coma trail.

We use trading tools that institutional level traders don’t, the closest comparison we could find to our activity would be a niche ’boutique’ fx trading hedge fund as even the largest currency trading hedge funds are unlikely to use combinations of lagging and or leading momentum and or oscillators for their crucial decision making. They’ll survey the macro economic landscape, be privy to market intelligence that we can’t ‘buy in’ and the only levels they may trade around would be: significant round numbers, large moving averages such as the 200 ma and perhaps support and resistance.

“As soon as it gets to 14.200 I’m out”. “When 13.500 breaks I’m going long”. Ignoring the arguments as to the overall wisdom of retail traders placing stops too close to round numbers it’s where many institutional traders may place stops, it’s also conversely where many algorithm based trading robots (developed by the leading banks) may look to hunt, as is the 200 ma plotted on a daily chart.

Pulling up the EUR/USD chart for today makes for interesting viewing the current price is (as probability would have it) at 13400, R1 is at 13457, S1 is at 13346. So here we have price at 13400 and the scope between R1 and S1 at roughly 100 pips. The daily pivot is at 13417. Now bearing in mind we’ve endured the most tumultuous of times for the Euro since it’s birth and it’s the big round numbers that are currently in play, possibly indicating just what a knife edge the current situation is in.

Let’s extend that theory a bit more, late evening and early morning news broke and began to have an impact with regards to the Standard & Poor’s potential credit downgrade from triple A for all the seventeen nation shared currency members and yet the price of the euro, the key figure of 13400, has been vital for the majority of the morning session. This level does not have a strange magnetic quality, it’s quite simply the key area at which the vast majority of decision making has taken place, both today and in previous trading sessions. The daily pivot was circa 13400, price is currently at 13400 and the billions or orders placed in the market place will now cause price to move towards either support or resistance.

Tomorrow we’ll finish part two of this two part article concentrating on trading methods using the big round numbers. But for now what’s the bets on where price is headed, will it accelerate towards resistance due to improved sentiment with regards to the Euro solution or will sentiment turn bearish due to the increased impact of the threat from Standard and Poor’s? The third choice is stagnation; price hovering around the daily pivot figure until tomorrow, or the interest rate decision on December 8th, or possibly until Dec 9th, regular readers will know which outcome my money’s on.