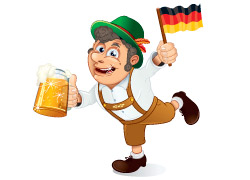 Oh those Germans and Their Wacky Sense of Gallows Humour..

Germans struggle to make us laugh and are, according to a poll conducted in summer, the least funny nation in the world. Americans can make us laugh like drains coming top of a poll to find the funniest of 15 nationalities. The verdict on the UK, lagging in seventh place, was “you’re not as funny as you think”, certainly not as amusing as; the Spanish, Italians, Brazilians, French or Mexicans. The poll by social network site Badoo concluded that German comedians were the least amusing because they could not laugh at themselves. Their humour was often lost in translation. German stand-up Henning Wehn said people did not understand his country’s love of slapstick, adding: “An old codger falling over, or a cake in the face is always funny, even in a famine.”

Obviously Ms. Merkel and the German finance minister didn’t get the Monday memo from Christine Lagarde as in a break from ranks they leaked a few home truths which bombed the markets in the USA and Europe. Who said the Germans had no sense of humour? The most worrying aspect of the current dilemma and phenomena should be the ‘proof absolute’ that this current bear market rally is held up by nothing other than hot air and promise, one misplaced breath, whisper of contradiction, or indication that someone in authority is not reading the script and the auto correction is immediate.

U.S. Stocks suffered their worst loss in two weeks on Monday after comments from Germany’s finance minister caused investors to fear Europe’s solution to its debt crisis may not come fast enough. The S&P index had risen for two straight weeks for the first time since July, built on optimism that European leaders had a commitment to tackle a crisis that threatened financial stability and global growth. German Finance Minister Wolfgang Schaeuble, speaking of an October 23 European Union summit on the debt crisis, tempered enthusiasm, saying, “we won’t have a definitive solution this weekend”. Wolfgang Schaeuble told the conference in Duesseldorf that European governments would adopt a five-point plan at the Brussels meeting to address the turmoil that has clouded the outlook for the global economy.

Credit Suisse and Deutsche bank have also neglected to drink the required amount of Kool Aid from the corporate water coolers, CS stated last week that according to their research, as many as sixty six European banks will fail the 3rd ‘stress test’, and as a consequence will need hundreds of billions of fresh capital. Deutsche Bank is now warning that France may be put on downgrade review by the year end. The CS appraisal was totally ignored last week, similarly the ‘markets’ appear to have ignored the suggestion by the G20 and singularly the E.U. ministers that a 50% haircut may be required by holders of Greek debt as part of the overall rescue plan. In fact there were suggestions over the past weekend that it could be 60% and yet the markets took it in their stride, perhaps there’ll be a reaction if 100% write down is mentioned, in other words a total Greece default and not the orderly “get in the queue and no pushing or you go to the back of the line” to get your money back touted by the elite politicians and bankers.

Deutsche Bank; “We highlight in this note that the French corporate sector is already financially stretched, with poor profitability and large borrowing requirements. We consider that the deterioration in economic conditions is now creating a distinct risk that France could be put under “negative watch” by the rating agencies before the end of this year. We think that France has the wherewithal to react to such an outcome and could avoid an outright downgrade by taking corrective measures quickly, but this naturally would be a very sensitive political decision a few months before a major election.”

Currency News
The euro fell against the dollar, following last week’s biggest advance in more than two years, as Germany signalled that Europe will take longer to contain the sovereign debt crisis. The dollar rose from a one-month low against the currencies of major U.S. trading partners. The euro dropped 1 percent to $1.3738 at 5 p.m. New York time after rising to $1.3914, the highest level since Sept 15th having advanced 3.8 percent last week, the most since March 2009. The Euro fell 1.5 percent to 105.55 yen after touching 107.68, the highest level since Sept 9th. The dollar slid 0.5 percent to 76.83 yen. The yen rallied from its lowest level in more than a month versus the euro and appreciated versus the dollar. Canada’s dollar fell 1.4 percent to C$1.0234 per US dollar. Oil, Canada’s biggest export, dropped. Crude decreased 1 percent to $86.29 a barrel. Australia’s currency is close to its 200-day moving average versus the U.S. dollar, a point of resistance, according to Citigroup Inc. The Aussie has risen 5.1 percent this month, having fallen 9.8 percent in September. It increased on Monday to as high as $1.0372, before dropping 1.8 percent to $1.0157.

« I have a dream. Did you Mr. Obama, Can You Remind Us What It Was? Forex Trading Rooms and The Double Jeopardy Issue of Latency »