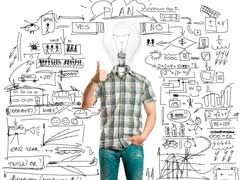 Nov 29 • Between the lines • 1751 Views • Comments Off on “It isn’t easy for an idea to squeeze itself into a head filled with prejudice.”

We all have our biases and prejudices were trading is concerned, in the Monday market commentary we’d suggested that a rally based on rumours of an IMF bailout and optimistic shopping figures in the USA didn’t appear to be a solid base for a sustained recovery given the overall mood with regards to the European crisis. But then the solvency/irrationality ‘equation’ hits you and as someone who preaches the “trade what you see, not what you think” mantra perhaps I should know better, particularly if a ‘short squeeze’ has caused the rally.

However, the fact that such a complex beast as ‘the markets’ can be moved by a rumour in Italy’s version of the UK’s Daily Mail and by manic USA shopper numbers, made up of shoppers prepared to pepper spray the competition in the queue in order to buy two dollar waffle makers, makes for nervous predictions and decision making. When sobering news, that should have acted as a moderating force in the market, is largely ignored by investors and speculators, it’s only natural to be concerned.

EFSF
Klaus Regling, the head of the European Financial Stability Facility (EFSF), is expected to tell eurozone finance ministers meeting in Brussels on Tuesday evening that the scheme to quintuple the firepower of the fund by underwriting initial losses on eurozone bond-buying by China and sovereign wealth funds in the far and Middle East has failed to attract enough interest.

Moody’s Warning
The Moody’s ratings agency predicted that a euro exit by any country would trigger a cascade of sovereign defaults across the eurozone. Jean Pisani-Ferry, director of the influential Bruegel thinktank in Brussels, said that “real businesses” as well as the financial markets were now “pricing in a break-up scenario … If disaster expectations build up and a growing number of players start positioning themselves to protect themselves from it, the consequences could become overwhelming.”

Fitch’s outlook on the U.S., which it still assigns its top AAA grade, reflects “declining confidence that timely fiscal measures necessary to place U.S. public finances on a sustainable path will be forthcoming,” making the probability of a downgrade greater than 50 percent over two years, the company said yesterday in a statement. Standard & Poor’s and Moody’s Investors Service said Nov. 21 that the so-called super-committee’s inability to reach an agreement didn’t merit downgrades because the inaction will trigger $1.2 trillion in automatic spending cuts.

France To Go On Negative Watch
French newspaper La Tribune is reporting that France will be placed on negative watch, threatening it’s AAA status, inside days. Standard & Poor’s (S&P) may well announce “shortly” adjust the AAA rating of France as “negative outlook” before a critical bond auction on Thursday.


“Italy will probably have to  provide additional support to its banks and will see some pressure on its economy. We expect that Italy’s banks will continue turning to the ECB and Italy for support. In 2012, the Republic of Italy needs to finance EUR320B of debt and is likely to experience increasing yields and restricted access without external  intervention. As of this weekend the yields on the 6 month notes were 6.5%; rates have been rising despite ECB purchases. The major issue is whether the IMF will become involved and if so, whether the face value of the debt will be cut. Italy cannot support all of its debt.” And what is probably worse is that according to what are likely very optimistic projections, EJ sees Italian debt/GDP rising from 127% in 2011 to 157% in two years. Indicatively, the cutoff ratio for a CCC-rated sovereign credit in Egan Jones’ view is 150% debt/GDP.”

IMF Deny Support
Although an IMF mission was expected in Rome within days, Bloomberg reported that the newspaper cited figures without attribution and the IMF denied the assertion via email. As of Nov. 17, according to the IMF’s website, the body has only about $390 billion available to lend. The paper also said that the IMF had several options to increase its firepower, including coordination with the European Central Bank.

OECD Predict Falling GDP
The Organisation for Economic Cooperation and Development said today that growing doubt about the survival of Europe’s monetary union has caused global growth to stall and represents the main risk to the world economy. The 34 OECD nations will expand 1.9 percent this year and 1.6 percent next, down from 2.3 percent and 2.8 percent predicted in May, the Paris-based organisation said in a report.

Market Overview
Global stocks rose for the first time in 11 days and commodities climbed after U.S. Thanksgiving weekend retail sales jumped to a record and speculation grew that European leaders will do more to tame the debt crisis. The euro rose, while Treasuries reversed earlier losses.

The MSCI All-Country World Index added 3 percent at 4 p.m. in New York, snapping its longest slump since 2008, and the Standard & Poor’s 500 Index rallied 2.9 percent to halt a seven- day losing streak. The euro strengthened 0.6 percent to $1.3312 after climbing as much as 1.2 percent. Ten-year Treasury yields were little changed at 1.97 percent after jumping as much as 11 points. The cost of insuring European government debt fell for the first time in eight days. Oil rose 1.5 percent.

Germany spurned investor calls to maximise financial firepower to calm markets, saying its fast-track proposals for EU treaty change are key to solving the euro-area debt crisis. Chancellor Angela Merkel will deliver a speech on the crisis to the lower house of parliament in Berlin on Dec. 2, previewing a Dec. 8-9 summit of European leaders that is due to discuss proposals for treaty change, Merkel’s chief spokesman, Steffen Seibert, told reporters today.

The Dollar Index, which tracks the U.S. currency against those of six trading partners, declined 0.6 percent to 79.226 as the dollar weakened against 14 of 16 major counterparts.

New Zealand’s dollar climbed against 14 of 16 peers, surging 1.9 percent against the U.S. currency, after Prime Minister John Key was re-elected with his party’s biggest mandate in 60 years.

« Every Exit Is An Entry Somewhere Else MF Global Went Postal »