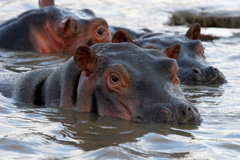 It’s a race, it’s a chase, hurry up and feed their face! Who will win? No one knows! Feed the hungry hip-ip-pos! Hungry hungry hippos! (open up and there it goes!)

With the advent of web sites such as the original friends re-united website and lately Facebook it's become relatively straightforward to track down many of your old friends and contacts. However, once you've reached a certain age you question where you'd stop on your retrieval mission given you must have met thousands of people and made hundreds of contacts and friends over the years.

I watch my eldest children on Facebook communicating with their friends and realise this new phenomena is for them. Not just due to the fact it's their 'space' and "adding your Dad on Facebook would be really lame" (I've coped with the rejection) but because having grown up with the technology and phenomena as it's evolved they'll simply add, delete and lose touch with contacts perhaps in a similar way to how most of us have over the decades, it'll become natural.

However, it's inevitable that from time to time you wonder how old friends are doing, particularly those who had a real impact on you. I had a friend who had the most brilliant insight into, what on the face of it, were the most complicated of issues. She had a 'Marilyn Monroe' charm, her innocence, matched by her blonde hair, razor sharp wit and refusal to believe how stunning she was, (both intellectually and physically), made her brilliant company. She gathered her insights into news events from a children's news programme called News-round. Typically a five minute news bite programme that diffused the news down to child-like levels; "it's all I need, I haven't got time to listen to all the complicated opinions, I just want the latest news explained to me in words in understand." I often think of this when surfing the news channels.

In the UK I have access to the BBC, ITV, SKY, Al Jazeera, CNN, Bloomberg and the Russian tv station RT news. RT news acts as my (slightly more sophisticated) version of my friend's news round up programme, it also offers a superb 'buffer' versus the incessant propaganda other state owned, or highly corporatised broadcasts offer up for consummation. You know RT is as pro Russia as the BBC is pro the UK government and it's that 'balance' of opinion that offers you an opportunity to diffuse all the information, messages and opinions you're bombarded with into some form of immediate coherent truth.

When explaining economic theory I use techniques and examples many of us will understand, I find this particularly useful when having discussions with my children. My eldest son is now studying economics at sixth form and some of the discussions and lessons we had when he was younger have undoubtedly sparked his imagination on the subject. One such discussion we had (and I've recently related it with his younger brother) was using their Hungry Hippos game in relation to the liquidity and solvency issues we've experienced since 2007.

The game is played by two to four players and is recommended by the manufacturer for children ages 3 and up. The object of the game is to cause the player's hippo to "consume" as many of the twenty white plastic marbles on the playing field as possible. The player presses a lever on the back of their hippo which causes the hippo's mouth to open, extend towards the centre of the board, close and retract. Marbles are drawn back into a depression within the hippo, so they do not drift back into play once properly consumed. Play ends when all of the marbles have been consumed by the hippos. The shaking of the lightweight playing field during play, particularly when children are pounding on the levers to make their hippos capture marbles, introduces a strong random element to the game. The game also is very loud, with the constant slamming of the hippo levers, and bouncing of marbles on the plastic board.

After you pour all the balls into the concave shaped arena, as the hippos aggressively fight over the balls as they swirl around the arena, some players get cute by developing what they believe to be techniques, perhaps waiting patiently to 'scalp off' the errant balls. Undoubtedly, having experimented with different techniques over the years, there's only one method that works; be first. Aggressively capture as many of the wayward balls as you can, in as short a period of time as you can, in order to be declared the winner. But what happens next? Well, you count up all the balls, make a note of who won and then repeat the pouring in of the balls until the hippos run out of balls, once again 'demanding' to be fed once more.

In a 1990 short story published in The New Yorker (and sarcastically named after the game), Edward Allen wrote, "The object of the game is to press your handle down again and again as fast as you can, with no rhythm, no timing, just slam-slam-slam as your hippo surges out to grab marble after marble from the game surface…."

You could nominate the four main players as the ECB, the IMF, the FED and the BoE as the Hungry Hippos. The IMF acts as the delivery mechanism of the balls and also as a player who less aggressively hunts the balls. It contends itself with contributions from the other players' wayward techniques, it plans to come last in the same way a Dad would if playing with children. The ECB, FED and BoE, having previously decided on the amount of balls to be in play, then hunt for the remainder of the balls in a fight to the end. Once all the balls are gone the game is over. In order for a new game to start they need the balls gathering up and then put back into the arena for the competitors to play again.

But what if the rules of the game were changed slightly, the hippos now took the balls from the original game and just sat there, refusing to give them back, or abjectly refused to play the game again until a new series of balls were placed into the arena? What if they did this time and time again until there were no new balls left anywhere? Actually, come to think of it, does this description fit perfectly as a metaphor for the behaviour of the main investment and retail banks (as opposed to the central banks) since 2008/2009?

What if instead of there being four players there were forty players in a giant arena? The central banks and IMF deliver the balls but take no part in the game, they simply pour all the balls into the arena and let the forty players invent their own complicated techniques within the game to see who gets to take the balls first?

Then the banks get clever, instead of using the 'basic' hippo the banks invent smart hippos that are quicker and smarter than the oppositions' hippos. When the game is over, which takes a lot longer than the original game, the forty players sit there in silence, emotionless. Having harvested the first series of balls they simply refuse to play the game until more balls are placed into the arena. What if the first time the game was played you started with platinum balls, then gold, then palladium, then silver, copper, lead..?

Each time the game is played the value of the balls gets less and less until there is nothing of worth you can put into the arena for all the forty competitors to fight over. The game reaches a natural end because there is nothing of worth you can place in the arena anymore. But here's were the description and discussion often ends.."But Dad, in your different version of Hungry Hippos if we start of with valuable balls such as gold, silver and end up with lead until there's nothing else left to give the Hippos to play fight over, they must still have all the balls, they can't have gone anywhere can they, when will they give them back?"

Please provide your answers on our comments section, a ten year old, a sixteen year old and a few thousand economists need to know the answer…