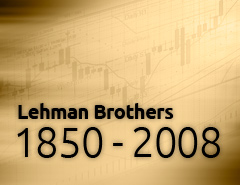 Happy Lehman day! Have the masters of the universe lost their kryptonite, or just their marbles?

Sep 15 • Forex Trading Articles • 10221 Views • 4 Comments on Happy Lehman day! Have the masters of the universe lost their kryptonite, or just their marbles?

On October 5th 2010 there was an audible gasp in the French courtroom at the historic Palais de Justice when the 'rogue trader' Jérôme Kerviel was convicted of a breach of trust, computer abuse and forgery. The 33-year-old was convicted of all three charges and was sentenced to five years' imprisonment, with two years suspended.

It was not the 'severity' of the sentence that drew the gasps and sharp intake of breath, it was the damages, set at €4.9bl to Société Générale, this was the total sum of money his risky betting strategies cost his former employers in January 2008. The Brittany-born computer expert was described as a quiet cynical operator who exploited his technological knowhow and market understanding to fool his employers. Exposing the bank to uncovered trades worth €50bn, more than Société Générale's total share capital at the time.

"The varied nature of his means of forgery and deceit were rivalled only by the dazzling reactivity, the constant cool-headedness and the deceptive serenity which he was able to exhibit on an everyday basis," said the judge. On reflection it may have been more appropriate if the gasps had been replaced with laughter, whilst massive the symbolic damages award was preposterous, if the idea was to send out a message then to who and how? The lenient sentence alone would not serve as a deterrent.

Irrespective of his actions the bank was later part of an ECB bank bail out, despite which its share capital currently stands at only €14 billion. It could be argued that the 'criminals' who have lost circa €38 billion of their bank's value this year are simply the usual suspect mixture of incompetents and blusterers of the banking fraternity and we've now come to accept this tight brotherhood will always escape punishment. However, small investors, pension fund managers and retirees might not be so accepting, they would no doubt put the current management of SocGen first in the queue for an appointment with Madame Guillotine ahead of Jérôme Kerviel.

Many commentators could be forgiven for treating with suspicion the allegations that have emerged this morning suggesting that another rogue trader has apparently run amok ultimately causing an unauthorised loss of circa $2 billion. As a result of this unspecified loss UBS, Switzerland’s biggest bank, may now be unprofitable in the third quarter. This is the bank that had to raise circa $45 billion from investors after the investment bank division recorded 57.1 billion Swiss francs ($65 billion) in cumulative pretax losses in three years through 2009. There will be inevitable calls for the investment arm of the bank to now shrink dramatically or close.

The sad irony and co-incidence is that this alleged fraud and loss has come on the third anniversary of Lehman bros filing for bankruptcy, this will no doubt raise doubts as to how comprehensive the supposed regulatory and self compliant improvements put in place since the banking collapse in 2008-2009 actually are. Whilst the Jérôme Kerviel 'incident' could be 'excused', given it occurred at the height of the banking crisis, this latest event has happened after back office regulations and compliance were now supposedly water tight.

This incident will actually have many in the mainstream media sharpening their pens to point out that no lessons have been learned since 2008 and to ask the question, "if this can happen after 2008 then how many other major investment banks have 'sleeper cell' rogue traders stalking their dealing rooms and floors?" To imagine that this latest 'miscreant' is the only rogue amongst the hundreds of thousands employed in the industry, is stretching belief to tensile breaking point.

One issue that the Kerviel 'incident' exposed was just how little the management at the very top of the investment banking industry actually knew about what actually happened on the 'shop floor'. Most never got their perfectly manicured nails within a paper cut of pressing bid or ask by using a mouse. This latest incident could once again prove that the ivory towers many occupy in the banking industry need scaling despite the hot tar, in the form of perfectly crafted press releases, that will no doubt pour down from great heights to defend themselves and the industry whilst the bonus awards remain intact.

Your company is now bankrupt, our economy is in crisis, but you get to keep $480 million. I have a very basic question for you, is this fair?

Fuld said that he had in fact only taken about $300 million in pay and bonuses over the past eight years. Despite Fuld's defence on his high pay, Lehman Brothers executive pay was reported to have increased significantly before filing for bankruptcy.

« Greece is the Word as the Risk of Global Recession Increases to DEFCON 4 Delta One, this is Control Tower Two Calling, Please Respond…Over »