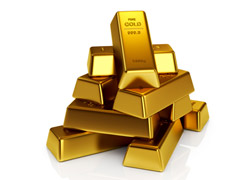 Gold Declines after the Fed Testimony

In early Asian trading base metals are trading up by 0.1 to 0.3 percent at LME electronic platform. The Asian equities are trading mixed with the Chinese bourses mostly downside. Weak performance of riskier assets has been witnessed on the back of falling FDI investments and increased demand for safe-heavens. Further, today the Chinese property prices drastically increased in 25 of the 70 cities surveyed and likely support gains in base metals.

The largest consumer’s Copper and Aluminum output have also increased in the month of June compared to May and may cap downside for metals. While investors are awaiting Bernanke’s second round of statements today evening, caution will dominate markets. In this context, base metals are likely to remain thin during the Asian hours after opening on a weaker note due to strong domestic currency.

However, base metals may gain slightly on the back of gaining equities and positive economic releases. From the economic data front, the Euro-zone construction output is likely to improve after increased boost in economic activity and increased allocation for infrastructure and may likely support gains. Further, the US mortgage applications are likely to improve after higher housing demand and gain in NABH house prices with increased housing starts and may continue to support gains in base metals. The building permits are likely to remain slightly down due to higher numbers of permits issued in near past. Gains are to be expected to be capped by lingering worries over the global economy after Bernanke painted a bleak picture of US economic prospects, and while the Euro-zone struggles with its debt problems and China tries to boost its slowing growth. However, in today session base metals may continue to remain strong due to better economic releases and improved downstream demand.

As it was anticipated, gold was well restrained within the range of $1570-1600 but the volatility was certainly wrecked havoc on investors’ sentiment. The move dovish the Fed got yesterday, the more metal got strength after the initial surprise of dashing hope for easing.The Euro is continuing its down trend against the dollar.

Japanese markets remained slightly strong after the BOJ released the minutes of its last meet showing a focused activity on financial stability. Bernanke however hinted some tools citing the possibility of additional bond buying. For example: buying treasury debt or mortgage backed securities or lending through emergency loan window and lowering the rate that Fed pays banks on reserves held at the central bank. All these could indicate a proxy of easing. They could also extend pledges to hold rate exceptionally low. However, his urge for avoiding the fiscal cliff by sharp spending cut and tax hike at the beginning of next year may weaken the market sentiment further. Overall, it seems to have a span of implications on financial market. Gold therefore seems to respect the technical range of $1550-1600 for intraday basis.