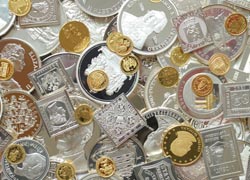 Gold and Silver Review After The Asian Session

May 16 • Forex Precious Metals, Forex Trading Articles • 2342 Views • Comments Off on Gold and Silver Review After The Asian Session

Unfavorable tertiary industry activity data from Japan coupled with decline in the country’s machinery orders and failure of talks to form a New Greek government led to rise in risk aversion in the global markets today.

This resulted Asian markets to trade on a negative note today. Greece has scheduled to hold its second election in just over a month after President Karolos Papoulias was not able to form a new government.

Retail Sales in the US also increased at slow pace of 0.1 percent in April compared to growth of 0.7 percent a month ago. Empire State Manufacturing Index increased to 17.1-level in current month from previous mark of 6.6 in last month.

The US Dollar (DX) gained by 0.8 percent on Tuesday as rising uncertainty over Greece political issues and Europe’s debt tensions spread the wave of risk aversion in the global markets. Additionally, mounting concerns over global economic growth also acted as a negative factor for markets. This boosted the low-yielding demand for dollar yesterday. Moreover, fall in Euro also supported further upside in the US dollar.  The index crossed the crucial 81-mark and hit a four-month high of 81.45 on Tuesday.

Mounting worries with respect to Euro Zone debt crisis coupled with rising political turmoil in Greece exerted downside pressure on the Euro on Tuesday. Additionally, strength in the US dollar and weak market sentiments also acted as a negative factor for the currency yesterday.

Gold prices on the international markets declined almost 1 percent and touched a four and a half month low of $1541.10/oz. on Tuesday. Rising uncertainty with respect to global economic growth due to escalating tensions over Europe’s debt crisis especially with Greece being the matter of concerns and weak sentiments in the markets acted as a negative factor for gold prices. Additionally, strength in the US dollar index also exerted further downside pressure on the yellow metal prices.

Spot silver prices dropped sharply by 1.5 percent in yesterday’s trading session on account of strength in the US dollar index and weak sentiments in the global markets due to Euro Zone debt worries. Moreover, silver being an industrial metal also take cues from downside in base metals complex yesterday. Silver hit an intra-day low of $27.56/oz. and ended its trading session at $27.70/oz. on Tuesday.

Gold and silver are expected to trade with a negative bias today on account of strength in the US dollar index, as a stronger dollar makes dollar-denominated commodities look expensive for holders of other currencies. In addition to this, risk aversion in the global markets due to Euro Zone debt worries will also act as a negative factor. Silver will also take cues from downside in base metals pack.