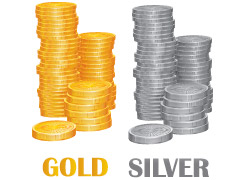 Gold and Silver in the Shadow of Spain and Greece

Jun 14 • Forex Precious Metals, Forex Trading Articles • 3413 Views • Comments Off on Gold and Silver in the Shadow of Spain and Greece

Today Gold futures prices have seen little changed from the prior closing and Asian stocks dropped after Spain’s credit rating was cut which has renewed the concern of European crisis contagion to the global growth. The Euro however is showing slight strength against the dollar amid anticipation of a win of new democracy which would take the nation out of the crisis and guard against abandoning Euro. Moody’s investors’ services reported Spain’s credit rating was just better than the junk by cutting three notches from “A3” to “Baa3”. As we expected that the bailout deal would give room to the rating agencies for down grading due to rising debt-to-GDP ratio and soaring borrowing cost this week earlier, has actually happened. Euro therefore still exhibits down side risk and gold as well.

The shared currency would have hold nerves only on anticipation of a pro-bailout party win. Amid this, Italy holds a bond auction today after borrowing cost rose to the highest since Jan 25 to 6.22% and the weekend Spanish bailout failed to improve the sentiment which took its 10-year bond yield to its highest 6.754%, a level that is barely sustainable and hence probably increased Euro weakness.

Reports today may indicate month of May’s US consumer price inflation are likely to ease and may be falling below Fed’s target of 2% followed from the plummeted gasoline prices (14%) and crude prices last month which have already reflected in a greater fall in PPI.

Also, the current account balance may worsen a bit after the trade deficits widen little. While the prior may support dollar spooking anticipation of next easing, the later may be a weakening factor for the currency. Certainly there are day to day factors that seem mild bullish at the moment but above said concerns are pretty troublesome for gold to maintain the strength. So, a range bound movement can be seen today.

Silver futures prices are also quoting slightly down in electronic trading which might be pressurized by the weak Asian equities. As expected the Spanish credit rating was cut down by Moody’s and that would have kept the market cautious ahead of the Greek election. Still the Euro is showing slight strength on anticipation of a win by new Democratic Party at the poll.

Italy is to hold a bond auction today after borrowing cost rose to the highest since Jan 25 to 6.22% and the weekend Spanish bailout failed to improve the sentiment which took its 10-year bond yield to its highest 6.754%, a level that is barely sustainable and hence probably increased Euro weakness. And thereby it may pressurize silver. As discussed in gold’s outlook, reports today from the US may show US CPI falling below the target rate which may spoke the market expectation of Fed easing although they have denied it for the moment. This would indicate a slight spike can be seen during the evening hours but the European concern is likely to keep the metal under stress.