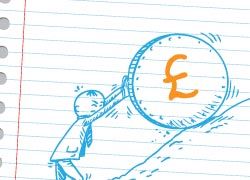 The royal scandal involving nude photographs of Prince Harry is proving to be a bigger piece of news, overshadowing the British forex news from the global markets. Prince Harry’s “jewels” displayed while playing a game of strip-pool in one of the MGM Grand’s VIP suites in Las Vegas were definitely hotter than the colored gems on the forex charts. But, the show must go on at the forex trading market. Even as the rowdy royal cannot expect the Queen to rave about his private show turned public, forex traders on can give a round of applause for the GBP as it exhibited a strengthening, albeit only by a slight uptick, against the USD.

British forex news reported positive gains for the GBP as the charts showed an ascending triangle. The uptrend is expected to continue from 1.5816 on the overnight way to the 1.59 levels, at which point the prices can move either towards a bearish correction down to about 1.56 or towards an extension of the rally towards the 1.60 levels. More bullish outlook puts the GBP up to 1.63, a record high for the year. Eyes, however, are trailed on the forex charts as the relative strength index closes in on being overbought.

Currency markets are continuously supporting the GBP, turning towards the currency as a safe-haven against the shakier currencies in the market. Even the GBP/AUD charts are showing a rising channel pushing above the pivot level at 1.4962. Keeping within this level indicates a continued bullish trend. However, pushing the RSI at 60 will indicate the end of the trend and the beginning of a bear cycle. Despite this, British forex news economists and monetary policy makers still find their economic growth to be near stagnant.

Also in the region, the Euro experienced a drop in prices as the markets moved away from risk-taking. Contractions in the manufacturing and services industries are expected to push the prices down further for the rest of the week and through the end of the month. Investor confidence on the Greek economy also continues to dwindle, dragging the currency prices further. Just like the Feds in the US, the European Central Bank is undertaking a bond purchase program that is intended to save the monetary union. Whatever rally might be observed in the EUR/USD prices would likely be short-lived to coincide with the Governing Council’s economic easing cycle. As aggressive perhaps as the lashing that Prince Harry will get from the Queen, the Euro should brace for some negative developments down the road despite the bullish bias on recent price charts.

What used to be the world’s stronger currencies are still definitely looking at a shakedown. While the GBP looks to be the strongest of the three today, British forex news remains to paint a more optimistic longer-term forecast. More cautious traders should look at short-term prospects on the USD and the EUR with the volatility brought about by economic fundamentals. Watching the price charts closely and paying attention to these fundamentals will take today’s forex trader for a good ride on these currencies.