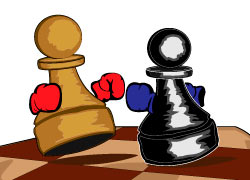 An old friend of mine used to teach scuba diving, he often remarked that many of his new divers had already been on the basic learner PADI course, PADI = Professional Association of Diving Instructors, he joked that he offered a different course, the STFUADI course. The last three letters of the acronym were “and, do, it”. I’m sure you can work out the first four words. Whilst on the subject of sport if you had to liken FX trading to a sport which one would you choose? For me there’s only one choice that wins the comparison contest, chess-boxing…

A round of boxing takes 3 minutes. Between the rounds there is a 1 minute pause, during which competitors change their gear. The contest is decided by: checkmate (chess round), exceeding the time limit (chess round), retirement of an opponent (chess or boxing round), KO (boxing round), or referee decision (boxing round). If the chess game ends in a stalemate, the opponent with the higher score in boxing wins. If there is an equal score, the opponent with the black pieces wins. Can you see the comparison with FX trading?

“So at what point does trading become pleasurable?” is a question often posed by new or fledgling traders. I often counter the question with the answer “it won’t”. Well allow me to back up a bit and re-phrase that statement; unless you’re actually enjoying the whole process now of learning a new skill, in a growing and developing market place and can see hundreds of possibilities emerging in your new industry then what makes you believe that by eventually becoming profitable you’re going to say, “d’ya know what, I love this industry..”? If that’s your rationale, that once you turn the next corner and find the yellow brick golden road of profitability you’re going to be a ‘shiny-happy’ trader, then the chances are you’ll be sorely disappointed.

Now regular readers of this blog and my column will know that I occasionally get deep and philosophical with regards to trading. Hey, who doesn’t take that ‘easy’ option when they’ve had a couple of losing trades in sequence? For the most part I’m a glass 51% full kinda guy, the practical, cynical, optimist, it helps me with my overall approach and attitude towards trading. So when I get ‘deep’ it’s never too deep given what we do as FX traders is a contact sport as well as being a chess match, but on this original question I would resolutely confirm that you have to enjoy the whole process now, in all it’s machinations, otherwise you need to question your motives for being in our chess-boxing game and question whether or not you’re made of the right stuff in order to stay the course.

I often suggest that new traders, or those who have recently lost their motivation for trading, take a step back and consider their options, but before they throw in the towel just take a quick re-cap as to what what brought them into this business and the attractions are vis a vis other professions, particularly self employed professions.

Before we delve into the benefits let’s look at what really hurts in trading, what we do to remedy that hurt can go a long way to protecting your enjoyment. Big losses hurt, there’s an obvious answer to alleviating the hurt and it’s painfully obvious..don’t take big losses! Limit the risk per trade to 1% (or less) and never accept more than 15% drawdown without asking yourself some serious questions with regards to each of the 3Ms of your trading edge.

To be fair as individual retail traders taking any loss (however small) is irritating and none of us actively embrace any kind of sacrificial pawn gambit strategy with the market, we’d all be happy to have 100% winners. Accepting the inevitability and random probability that two out of three trades being winners is as good as it’ll probably ever get, measured over the medium to long term, tends to ‘centre’ traders and inject some much needed realism. Aim for that R:R, keep your losses to no more than 1% of your account balance and the pain of individual losses will eventually diminish.

What is for sure is the biggest pleasure killer in our virtual chess boxing match with this market is losers, reducing potential losses to their bare minimum will ensure that your pain threshold is kept to a minimum. But let’s move onto the positives in this business, the 3Fs; freedom, fun, finance.

THE FREEDOM aspect is self explanatory, as a retail trader you are a self employed entity, not answerable to ‘superiors’, your responsibilities are to you, your family (if not single) and your account balance. The targets you set and the deadlines you impose are yours to adjust to your new found reality. You choose the hours, the days, the level of commitment. As self employment goes your overheads are zilch and your arrangement with the tax office involves a print off of all your trades. You don’t even need an accountant.

THE FUN of learning a new skill and entering ‘full tilt’ into a new exciting environment should always be there at the forefront of your thinking. What we do is surprisingly creative and highly technical. And hey come on, let’s be honest, who doesn’t get a bit of a buzz out of what we do? Consider all the jobs out there you could be doing and we’ve chosen to trade FX. You should feel blessed especially if like many you’ve landed in this industry by a combination of accident and design. We are as carbon neutral as it comes. We trade a ‘synthetic’ market (nothing is actually bought and sold) meaning we’re as ethical as you can get in the overall world of trading. We ‘harm’ no one, except perhaps a tiny fraction of Bank’s balances and they can cope with (and deserve) a few ankle biters.

THE FINANCE is a dream, how many other businesses can you start from a standing start and be capitalised sufficiently at the start for the price of a decent second hard car. You shouldn’t have to furnish business plans to a bank manager who wants your house as security. You don’t need loans, you just need to complete your apprenticeship and then re-load your account with your first serious a amount of capital which could generate a small and consistent wage.

So at what point does trading become pleasurable? This chess-boxing match you engage in should be stimulating from the start and once you’ve done the initial apprenticeship course you move onto the next stage when it becomes part of your everyday existence, let’s call it the STFUADI stage.

« Just Above Zero Is The New Norm Power To The People, But Not To Certain Greek Ministries »