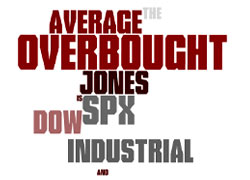 Is The Dow Jones Industrial Average And The SPX Overbought?

Feb 23 • Between the lines • 2125 Views • Comments Off on Is The Dow Jones Industrial Average And The SPX Overbought?

So the Dow Jones reached 13,000 on Tuesday and then reverted to the obvious underpinning mean average (moving average). No surprise there, the 13,000 must have been market stop hunting paradise for market makers given it was such an obvious target. If I traded indices (perish the thought) a sell order looking for 20-30 pips at 13,000 would have been the obvious trade..

But given the raft of positive news that’ll come our way from the U.S. of A between now and the USA election in November we can be fairly sure that 13,000 will be tested and breached, (perhaps several times) in the run up..right? After all the main index never falls in the run up to the election, does it?

However, elections definitely have huge market consequences. When a new (non-incumbent) president takes office, the average return for the calendar year has been 7.48%; whereas the return has been a meagre 1.13% in years when an incumbent president starts a new term. Now Barack Obama inherited a maelstrom of financial problems in 2008, but in 2009 the market recovered and despite several major sell offs during his term the DJIA and the S&P recently reached pre 2008 crash highs. But could 2013 prove to be the real test, could even a 1.13% return be optimistic?

As to which party the market smiles upon more when its president takes the seat in the Oval office will take many by surprise. The average DJIA return when a Democrat was president has been 8.78% a year versus 6.30% annually when a Republican lived in the White House.

The BGOV Barometer shows that, over the five decades since John F. Kennedy was inaugurated, $1,000 invested in a hypothetical fund that tracks the Standard & Poor’s 500 Index only when Democrats are in the White House would have been worth $10,920 at the close of trading Tuesday.

That’s over nine times the dollar return an investor would have enjoyed from following a similar strategy during Republican administrations. A $1,000 stake invested in a fund that followed the S&P 500 under Republican presidents, starting with Richard Nixon, would have grown to $2,087 on the day George W. Bush left office.

Market Overview
U.S. equities fell a day after the Standard & Poor’s 500 Index failed to hold at an almost four year high, as sales of previously owned houses missed estimates and data from Europe and China heightened economic concern. The S&P 500 retreated 0.3 percent to 1,357.66 at 4 p.m. New York time. The Dow Jones Industrial Average lost 27.02 points, or 0.2 percent, to 12,938.67 after the 30-stock gauge rose above 13,000 yesterday for the first time since 2008.

Futures traders are pricing in the biggest increase in U.S. equity hedging costs since 2010 after the S&P 500 rose within 2 points of erasing last year’s slump. April futures on the Chicago Board Options Exchange Volatility Index closed at 25.15 yesterday, or 6.96 points higher than the level of the gauge, according to data compiled by Bloomberg. The gap widened to 7.02 points on Feb. 17. The last time two-month futures were that high in relation to the index known as the VIX was July 2010.

The S&P 500 has surged 24 percent since Oct. 3 due to domestic confidence and optimism Europe will resolve the debt crisis. Now, traders are increasing hedges to protect against losses.

Brent oil for April settlement advanced $1.24, or 1 percent, to $122.90 a barrel on the London-based ICE Futures Europe exchange yesterday. The European benchmark contract’s premium to New York-traded West Texas Intermediate closed at $16.62. It reached a record of $27.88 on Oct. 14.

Forex Spot-Lite
The dollar maintained gains from yesterday versus the majority of its most-traded counterparts on concern oil prices at a nine-month high will restrain global growth, increasing demand for haven assets.

The U.S. currency yesterday climbed versus 10 of its 16 major peers as a report showed European services and manufacturing output shrank in February. The Ifo institute will today release its business climate index for Germany, Europe’s largest economy. The greenback halted a five-day gain versus the yen before a U.S. report forecast to show initial claims for jobless benefits rose from a four-year low.

« Forex Fundamentals, A Quick Reference Sheet Will It Be Open Season On The Banks As Reporting Season Starts? »