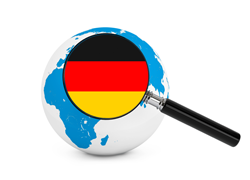 EC may probe the German trade surplus, whilst UK inflation may fall to 2.5%

Britain’s inflation rate could drop to a six-month low when the monthly measure of the cost of living is released this morning. Many analysts are predicting that the UK’s Consumer Prices Index will drop to 2.5% in October, down from 2.7% in September. This is close to the Bank of England’s 2% target, but still outpacing wage increases by circa 2% and well above recorded inflation in the Eurozone. (0.7%). The RPI inflation level is predicted to come in at 3.0%.

Germany called out for being too successful

There are times when Germany’s government officials must wonder what it’s got to do as a nation in order to satisfy all the complaints it receives from all directions. Now its highly commendable trade surplus is under attack, the suggestion being that its surplus is too large and is indirectly threatening the economic welfare of its neighboring countries.

Germany creates a thirty plus billion euros monthly surplus and apparently “it just isn’t playing the game” where you’re supposed to run a negative balance by killing off exports and importing cheap tat from China to sell “through the shops”. After all if the likes of the UK and USA are seventy percent reliant on consumers for their economic performance, whilst running up budget deficits, isn’t that the economic model every country should aspire to? The USA trade balance is predicted to be circa $39 billion negative when reported this Thursday…

Olli Rehn, the European Commissioner for the euro, revealed on Monday that the EC will decide this week whether to launch a probe into Germany’s trade surplus. Rehn attributes the large German surplus to three factors: protection from an appreciating currency, access to cheaper labour, and the financial convergence across Europe (so that profits made in Germany were invested in Southern European countries rather than financing consumption at home). His overall message is that Germany’s export success is a complicated issue affecting overall trade in the EU.

“Because these important issues deserve further analysis, the European Commission will this week need to consider whether to launch an in-depth review of the German economy in the framework of the EU’s Macroeconomic Imbalances Procedure. Such a review would provide both European and German policymakers with a detailed picture of the economic challenges and opportunities facing the eurozone’s largest economy. Of course, Germany is not the only country whose policies have spillover effects on the rest of the eurozone. As the two largest eurozone economies, Germany and France together hold the key to a return to growth and employment in Europe.
“If Germany can take steps to lift domestic demand and investment, while France embraces reforms to its labour market, business environment and pension system to support competitiveness, they will together do a great service to the entire eurozone – providing stronger growth, creating more jobs and reducing social tensions.”

The troika had been due to meet administrative reform minister Kyriakos Mitsotakis on Monday to discuss what’s described as ‘progress’ towards laying off 4,000 civil servants by the end of this year. That meeting is now postponed until today in order to allow the troika to see finance minister Yannis Stournaras first. There appears little chance that the troika inspectors will conclude their visit to Athens in time for this month’s meeting of Eurozone finance ministers, on Thursday. And there is little news regarding the apparent difference in the sums; Greece believing its only €500 ml short its target other analysts suggesting as much as €3 billion.

Twitter shares dropped 5% at the start of its third day as a floated company.

Shares in the micro-blogging service, a euphemism for being able to share a short text with any one dropped by $2.1 in early trading to $39.54, having begun trading at $45.10 on Thursday. A premium on the $26/share IPO price but relief for many critics who believe that Twitter has been seriously overvalued.

The euro climbed by 0.3 percent to $1.3409 in New York’s trading session after dropping to $1.3296 on Nov. 7th reaching the lowest level seen since Sept. 16th. The 17-nation shared currency added 0.5 percent to 133.02 yen. The dollar gained 0.2 percent to 99.20 yen. The U.S. Dollar Index, which tracks the greenback versus its 10 major peer currencies, was little changed at 1,021.11 after rising to 1,024.31 on Nov. 8th, the highest level seen since Sept. 13th. The euro rose versus the dollar for the first time in three days amid speculation that last week’s drop to the lowest level in almost two months was oversold.

The pound declined 0.5 percent to 83.90 pence per euro late in London time after appreciating 1.5 percent last week, the most since the period ended April 26th. Sterling dropped 0.2 percent to $1.5982 after gaining 0.6 percent last week. The pound weakened for a second day against the euro and dollar before the Bank of England publishes new forecasts in its quarterly Inflation Report. The pound has strengthened by 3.6 percent in the past three months, the best performer of the 10 developed-nation currencies tracked by Bloomberg Correlation-Weighted Indexes. The euro has gained 0.7 percent and the dollar has risen by 0.2 percent.

Germany’s 10-year yield was little changed at 1.75 percent late in the London session after rising seven basis points on Nov. 8th, the most since Sept. 5th. The 2 percent bond due August 2023 climbed 0.025, or 25 euro cents per $1,000-euro ($1,340) face amount, to 102.18. European government bonds rose, with German 10-year yields snapping their biggest gain in two months, before a report this week that economists said will show euro-area growth slowed in the third quarter.

In the overnight early morning trading session we’ll receive the publication of the Australian NAB business confidence report. Japan will release its consumer confidence index, predicted to come in at 46.3. UK inflation figures are published in the London session, expected to come in at 2.5% for CPI and 3% for RPI. The USA small business index is published in the afternoon session expected in at 93.5, as is the RBNZ financial stability report for New Zealand. It provides insights into the bank’s view of inflation, growth, and other economic conditions that will affect interest rates in the future. The RBNZ governor Wheeler will then hold court shortly after the financial stability report to discuss the current state of the nation’s finances.

« Is Japan’s economic policy beginning to reap rewards? Can you actually live off trading FX? When reality bites and hurts… »