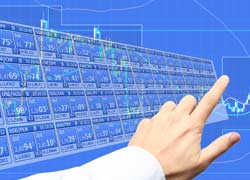 There’s another similar phrase that describes the folly of waiting for your pre-determined price to be hit before you close the trade, it ends with the word tick, I’m sure readers can deduce the rhyming word used for self admonishment that would accompany the word “tick”..

It’s a common scenario that happens to the best and rest of us; you have a target in mind of perhaps 100 pips and price keeps nudging up to 90, 92, 95 pips profit..”just one more push and we’re there, it’s ages since I bagged triple figures”..then bam!..price falls back to circa 70 pips profit and the trade begins to look unhealthy. Do you bail or sit out what you hope will be a retrace? Moreover, you ask yourself how you’ve got yourself in such a situation and what can you do to avoid it in future?

Is the simple answer not to have round numbers as targets and aim for 44 pips and 88 instead of 50 and 100? Actually that’s not as crazy as it appears, removing psychological targets, which have no basis of mathematical or probability under-pinning them, is a sensible move. But we can go much further and deeper with our trading plan in order to ensure we don’t see our profits evaporate on a regular basis.

There are tools we could theoretically put in place, together with strict rules of money management, that could lessen the probability of witnessing a proportion of our profits simply evaporating. The obvious is to use the fairly blunt instrument of trailing stop losses, fixed or dynamic.

However, many traders prefer not to use trailing stops. If when the market moves it always moves in predictable linear patterns then trailing stops, particularly dynamic stops, would work like a dream. But there’ll be many of us reading this article who have experienced the brutality of trailing stops; you’re at the beginning of a trend trade, price takes an age to reach profitability, you’re up 35 pips, price retraces by 50 to leave you close to where you entered the trade.

Your dynamic trailing stop takes you out for a 15 pip loss. Price then stabilises to move up past fifty pips profit, but according to your rules and trading plan you can’t justify another entry on this pair on this trend, you watch the trade you’d got right go wrong. Whilst many traders adhere to the “don’t ever let a profit turn into a loss” maxim in terms of trading reality it can often be a difficult, perhaps impossible skill to execute.

So if we don’t use trailing stops what can we use in order to make a judgement call? We could use indicators; the rsi and or stochastic coming out of (or entering into) the 30 or 70 zones. Or we could refer to levels on our charts, draw a couple of critical moving averages and look for a slightly ethereal indicator..

Firstly there are three levels of support and resistance, R1-R3 and S1-S3 that should be plotted on your chart. Secondly the major moving averages could also be plotted, such as the 200 MA, and there’s a third measure which can and is used as an average which is often overlooked, the ethereal ‘indicator’ mentioned earlier, the average movement a currency moves on a daily basis. Lastly our metric of looming round numbers should not be ignored.

What represents a large intraday currency pair movement; 0.5%, 1%, 1.5%? If you captured a full one percent daily move on any currency pair would you consider it a big and hopefully profitable move? For sure, a movement of circa 150 pips on cable would be significant, as would one percent on EUR/USD, circa 130 pips. How could we put all this information together on order to make a judicious decision in relation to closing a trade before or around the loose target we’ve set?

Let’s presume a typical scenario and talk through it. You’re in an intraday EUR/USD trade today and price has accelerated through the daily pivot, effortlessly moving up through R1 and R2 and flirting with R3. Your long order was filled at 13190 close to the market opening (with a gap) on Sunday evening. R3 is plotted at 13270. Based on historical probability what are the chances that price will experience a retrace from R3 once reached? The answer is that the probability is extremely high, whilst price often blasts through R3 that could be considered the extreme of a price movement.

Now given this is a Monday an argument could be put forward that the resistance and support metric is dubious, similarly in using Pro Real Time’s European charts they may differ from using USA broker firms charts. However, moving aside those Monday morning session doubts the theory remains steadfast, price will in all probability, measured over a significant period of time and trades, not move much further once R3 or indeed S3 has been reached.

In the specific instance of this trade once price reached R3, 13270, we’d have put in place a take profit order and banked our 80 pips. Given the recent constant stream of news on the Eurozone price could quite probably accelerate beyond R3, however, price reaching R3 can often be used as an extreme.

Is there any other metrics, in other spot forex trades in the future, that we could add to the R3 or S3 level to establish whether or not we should close the trade?

We could look to see if price has approached a full one percent movement on the day, if your signal to enter long came when price was up by 0.4% and price is now at 1%+ for the day, approaching or already breached R3, then it could be a prudent time to exit. That further 0.6% movement may be close to exhaustion and may have offered up circa 80 pips. If that price is close to a major MA, or looming round number then the possibility exists that price may reject these levels.

If operating off a one hour chart for your intraday trading then a R:R of 1:2 is not uncommon. Putting that into ‘hard numbers’ a 50 pip, stop aiming for 100 pips, is a reasonable target and illustrates sound money management (if only risking 1-2% of your account). But rather than aim for the strict 1:2, just keep it at the fore-front of your trading mind as a possibility. Using our example of 80 pips gained for fifty pips risked you’ve captured 80% of your anticipated move, that has to be considered excellent trading by any judgement..that extra 20 pips should not even be considered as worth ‘fighting’ for.

« As Iceland's Economic Winter Thaws What Lessons Can Be Learned By Europe's Policy Makers? Greece Is Put Into A Dutch Oven »