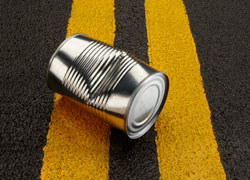 Can You Kick It? Yes You Can

There’s many of us market commentators and analysts as sick of using the same tired metaphors as we are of listening to (or reading) reports with regards to the EFSF, the troika, the EU etc. Just when you think this can has no more metal left on it to kick down the road the various powers find another delaying tactic.

Only now as we approach the ‘zone of the end game’ are “the markets”, the intelligence that must be obeyed, finally waking up to the fact that the collective big brains involved in the decision making have all the smarts of the Conservative MPs in the UK Government who effectively killed their careers on Monday evening by voting yes to a referendum on Europe that was never going to happen…doh..

The relationship with politics shouldn’t ever be underestimated, the UK public got that tired of hearing former premier Tony Blair use the words “weapons of mass destruction” they’d have gladly voted in a heartbeat to send their first born on an invasion to Saturn rather than hear him mention the initials WMD one more time. Perhaps the ‘great and good’ of the EU decision making process hope that the public will get that tired of these meetings that they’ll simply switch off to the impact, however, that’s presupposing that the majority had any interest or understood either the various mechanisms or impact. What has come as a surprise is how collectively stupid the markets are, particularly if they failed to recognise that the real elephants had left the room and were busy crashing down the foundations; Italy and the F in the effin PIIGS, France were always the bigger issue, not Greece.

It’s akin to watching a good friend, who has very little to offer, get away with standing up his drop dead gorgeous girlfriend with an inane excuse by text and her texting back that she understands. She totally accepts that watching footy in the pub with his mates is better than taking her out, despite the €200 she spent on her hair, the €300 on her new dress and she’s sorry to have come between him, his mates and lager and she’ll make sure to pick her moments better next time and she’ll make it up to him. He reads the text, chuckles and shows it to you and you shake your head wondering “how on earth…?” That’s how collectively naive and lacking in overall intelligence the markets are, the markets never lie, but they can be lied to particularly when they actively encourage it.

Now Wednesday’s D-Day approaches all bets are off, the meeting of meetings to underscore all the other meetings, conference calls and Skype messaging is partly suspended, suspended in disbelief or jello it matters not, ‘they’ can’t agree to the only workable solution this blog pointed to some weeks back; a mega bailout of circa €3 trillion. Anything else is putting sticking plaster over a wound that needs surgery, ‘they’ know it, we know it, the markets may need to play catch up.

Back in the USA Tim Geithner has voiced his concerns, from a safe distance this time, as opposed to visiting the 17 leaders of the Eurozone to be told “we’re taking no lectures from you”. The U.S. Treasury Secretary said on Tuesday that finding a solution to the European debt crisis in the next several days is imperative because that predicament is the “biggest challenge to growth worldwide. We want to see details, not just the objectives, and the primary burden falls on the Europeans.” While direct U.S. exposure to the most troubled European nations is limited, Treasury officials have said U.S. bank exposure to large European lenders is significant.

The kicking the can down the road metaphor has been illustrated by the USA finding another solution to the vast amount of homeowners who are ‘underwater’ (in negative equity) with their mortgage versus home value. The USA admin is proposing to enlarge their HARP facility creating further relief to enable mortgage payers to stay in their homes. However, mortgage holders may not be easily fooled, this exercise is not the altruistic social enterprise it claims to be, the mainly state owned banks, who created the sub prime market, are at pains to avoid more losses, the legal system could begin to crack under the strain of a further round of repossessions and with QE3 looking a ‘slam dunk’ a further deterioration in home values could negate a significant worth of the next round. Therefore it’s best if the powers go to any lengths to keep folks in their debt..oops..in their homes.

The USA suffered a mixed bag of economic reports on Tuesday, consumer confidence unexpectedly dropped to its lowest level in two-and-a-half years in October, while house prices were unchanged at low levels in August, suggesting the consumer is still struggling and in an economy 70% dependent on consumerism this news is unwelcome. The Conference Board’s index of consumer attitudes fell to 39.8 from a upwardly revised 46.4 the month before. Analysts had expected a reading of 46.0. The expectations gauge was also at its lowest level since March 2009, just before the economy officially crawled out of recession. The S&P/Case Shiller composite index of house prices in 20 USA metropolitan areas was flat compared with the month before on a seasonally adjusted basis, frustrating expectations for a gain of 0.1 percent. On a seasonally adjusted basis, prices fell in 14 of 20 cities, with Atlanta and Las Vegas among the biggest losers, according to the data. The annual rate of decline slowed, however, with prices in the 20 cities down 3.8 percent compared with a year-over-year decline of 4.1 percent the month before.

Currencies
The euro declined 0.2 percent to $1.3908 after rising to $1.3960. The euro has declined 2.5 percent in the past six months, according to Bloomberg Correlation-Weighted Indexes, which tracks ten developed-market currencies. The dollar has gained 3.3 percent over the same period, and the yen has risen 12 percent. Once again the yen touched a post-World War II high versus the dollar and rallied versus most of its other major counterparts as Europe’s debt turmoil spurred demand for the obvious refuge.

The yen was little changed at 76.09 versus the dollar at 5 p.m. New York time after rallying to a record 75.74. Japan’s currency advanced 0.2 percent to 105.83 against the euro. Bank of Japan policy makers will discuss measures to roll back the impact of the strong yen at a two-day meeting beginning Wednesday. Measures may include expanding a 50 trillion yen ($660 billion) asset purchase program by 5 trillion yen and purchase bonds with maturities longer than two years. Canada’s dollar fell 1.3 percent to C$1.0167 versus the U.S. currency after the Bank of Canada said the nation’s economy will grow more slowly than projected and removed their previous commitment to withdrawing stimulus. The target lending rate was held at 1 percent. IntercontinentalExchange Dollar Index, which tracks the USA dollar versus the currencies of six major U.S. trading partners including the euro, yen and sterling, rose 0.1 percent to 76.252.

There are no economic data releases to be mindful of for the morning London session and European session. Naturally any such releases would be dwarfed in importance by the huge macro economic decisions that still have to be ratified.

« Candles in the wind, a brief introduction to candlestick trading methods The B53 is the USA economy »