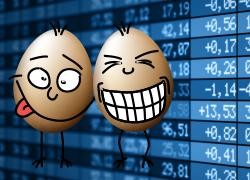 Markets Get Weird As The Holidays Approach

As the Easter Holiday comes closer, volumes will start to quiet down. This year the Easter Good Friday Holiday coincides with a major Jewish holiday, which means volume will be at an all time low. On Friday the US will release the Non Farms Payroll Report, although most markets will be closed. Mainland Chinese bourses, closed for a holiday, are set to reopen Thursday; markets in Hong Kong and Taiwan will also be shut on Wednesday. Many regional markets will be closed on Friday and Monday for Easter or other local holidays.

Traders will start adjusting their positions prior to the market holidays.

This week, traders and speculators need to be aware of all the market variables because of the holiday weekend. Today, in Hong Kong the Hang Seng Index climbed 1.3% to 20790.98 and South Korea’s Kospi moved up 1% to 2049.28. The S&P/ASX 200 index ended 0.2% higher at 4337.0, coming off the day’s highs after the Reserve Bank of Australia left its benchmark interest rates unchanged. The markets had been expecting interest rates to remain at 4.25% but there was a possibility that Glenn Stevens, Director of the RBA could have pushed for a .25% reduction.

On the downside, Japan’s Nikkei Stock Average fell 0.6% to 10050.39, while Taiwan’s Taiex gave up 1.3% to 7760.85 on worries the government may propose a capital-gains tax. Tuesday’s bounce can be attributed to generally positive economic numbers from the U.S. and China, but added that caution was the leading sentiment.

We are approaching a long holiday so investors just prefer to stay on the sidelines. They are waiting for next week when there will be more economic news.

The day’s broad gains came after U.S. stocks stretched their best three-month performance since 1998 into the second quarter.

Stock gains in Sydney narrowed after the Australian central bank failed to deliver a surprise. It left its policy interest rate unchanged at 4.25%, though it said the pace of output growth was expected to be “somewhat lower than earlier estimated”; it held off assessing its inflation outlook until data on first-quarter prices come out later this month.

A weaker U.S. dollar helped to support many resource stocks in the region. In Hong Kong, Jiangxi Copper jumped 4.7% and PetroChina added 1.6%.