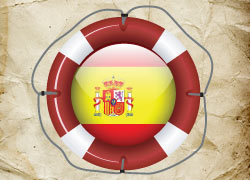 The EU Firewall – A Lifeline For Spain

On the last business day of March, the EU Finance Ministers announced their latest attempts to stave off the eurozone debt crisis by  boosting the eurozone’s firewall to €800 billion ($US1.07 billion) on the same day as the new Spanish government Mariano Rajoy unveiled a massive cut in its budget deficit together the news failed to lift investor confidence.

These actions invoked the reverse of the purpose they were to serve; the actions only fuelled market jitters.

Investors quickly figured out that the €800 billion firewall which was supposed to provide proof that the eurozone had ample resources to rescue Spain also included around €300 in bailout loans already made to Greece, Ireland and Portugal reducing the overall value.

Markets were doubtful that Spain could meet what its budget minister, Cristóbal Montoro, described as “the biggest fiscal consolidation of the democracy” given the country’s flagging economy and explosive 23%unemployment rate. A budget on a paper is much different than a functioning government in reality.

Spain has announced spending cuts and tax increases of more than €27 billion in an attempt to reduce its budget deficit to 5.3% of GDP this year, from 8.5 per cent last year.  While GDP continues to plummet and the current budget deficit continues to grown. It is like trying to reach a moving target.

There are already worries and problems related as to whether Spain’s autonomous regions, which account for one-third of public spending including education and health, will be able to meet the ambitious deficit reduction targets set by Madrid. The other question is will they even try?

Markets are now deeply worried that Spain will find it near impossible to meet its overreaching deficit reduction goal. Economist and Investors fear that spending cuts will plunge the economy into a never ending recession, pushing tax revenues lower at the same time that spending on unemployment benefits will rise.

German finance minister Schäuble is promoting a plan to set up EU finance committees that would be responsible for supervising the national budgets of eurozone countries, and for keeping a watch out for “abnormal developments” that could result in a crisis.

Schäuble is a true German, always demanding control and pushing countries and people to their limits. He was almost single handedly responsible for a collapse of Greek negotiations. Schäuble overstates Germany’s power within the EU.

According to an internal document from the German finance ministry, the new committees would also make sure that the national budgets of eurozone countries complied with the region’s new “fiscal stability pact”, that sets out strict deficit and debt rules. Most eurozone governments would see that as an infringement on their sovereignty.