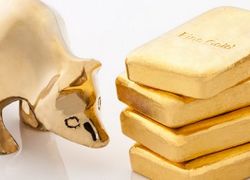 A Bearish Look At Gold

Gold has edged lower, extending losses made in the previous session, as the US dollar firmed on worries about Spanish debt yields and the pace of Chinese economic growth. The markets this morning seem to be all about risk aversion.

Gold fell 1 per cent in the previous session, as a selloff in riskier assets spilled over, although it still managed to post a 1.7-per cent weekly rise. Weaker-than-expected economic GDP in China in the first quarter weighed on financial markets, at a time that the US recovery momentum seems to be slowing and fear about the eurozone debt crisis resurfaced. It was a triple header on Friday, China, Spain and the US all weighing down the markets.

Gold is at a crucial point now, as $1650 is a very important support level. If prices break below the level, we may see a flight to $1620. Spot gold lost 0.4 per cent to $1648.26 an ounce.  Technical analysis suggests spot gold will drop to $1630 an ounce during the day, Reuter’s market analyst Wang Tao said.

Since gold failed to break much below $1650 over the weekend, it is likely Monday will be a quiet day.

Spot silver dropped to a one-week low of $31.27 an ounce, before paring losses to $31.43. The metal slid 2.5per cent last session. Speculators cut their net long exposure in gold and silver in the week ended April 10, reported the CTFC.

A report released on Friday showed China’s economy grew at its weakest pace in nearly three years in the first quarter denting risk appetite. Physical buying in Asia’s bullion market slowed due to higher prices, but gold-buying festival of Akshya Tritya in India in late April is likely to help bring in some demand from the world’s top consumer of the metal.

Comex gold futures are still consolidating in a very broad range waiting for direction. Prices pulled back higher but failed to sustain. As mentioned in the previous update, chances exist for a decline below psychological support at $1,600. It could even accelerate further towards $1,555-60 levels too in the coming sessions.