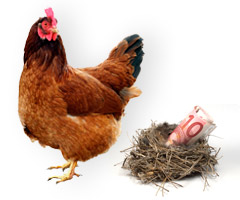 When Will the Troika’s Headless Chicken Fall on the Bailout Spot?

Oct 4 • Between the lines • 2952 Views • 1 Comment on When Will the Troika’s Headless Chicken Fall on the Bailout Spot?

Whilst numerous cerebral films, bios and documentaries have been made musing on the reasons for the 2008-2009 crash, (such as the superb Inside Job), none managed to capture the malaise with the clarity, brevity and humour as the episode of South Park called Margaritaville. The basic premise behind the episode was to explain why the system broke down. The makers also managed to take a side swipe at Americans’ religious views. Part of the episode’s brilliance is owed to the producers explaining the cause and effect of the crisis so quickly. In comparing Americans lack of understanding and faith in money to blind acceptance of religion they pulled off a master stroke.

In the sub plot one of the characters reaches the very top of the Treasury department for an explanation were he quickly discovers that decisions are made by ‘consulting the charts’ and a headless chicken running around a gameshow style board. If the chicken lands on the ‘bailout spot’ the financial institution gets bailed out.

The episode is overall a satire and commentary on the global recession affecting the industrialised world at the time the episode was broadcast. One of the characters Kyle is portrayed as a Jesus-like saviour working to save the economy, and Stan spends much of the episode trying to return a personal Jimmy Buffett Margaritaville machine.

The storyline begins as Stan tries to save money by depositing it into a bank but it “disappears” moments after. A recession hits the nation and South Park. Randy explains to Stan that the economy is failing due to people spending their money on luxuries. Ironically, he continues his lecture while making himself a margarita in a Margaritaville-brand mixer.

Randy convinces everyone in the town to reduce spending to bare essentials in order to initiate the economy’s anger though defending his own frivolous purchase by saying the essentials include margaritas. His recommended changes make the town resemble first-century Galilee. Kyle, getting annoyed, responds that the economy is not actually angry with them, and that they should be out spending money. Kyle preaches that the economy exists as a mental construct, if they want the economy to be strong, they must have faith in it. Randy and the council, upon hearing this, decide that they need to kill Kyle. Cartman, in his desire to obtain a copy of Grand Theft Auto: Chinatown Wars, says that he will deliver Kyle to Randy and his friends in exchange for the game.

In a Last Supper, Kyle and his friends go out for pizza where he laments that he feels they will not be able to get together like this anymore because he thinks one of his friends will betray him. The next day, Kyle sets up a table with a credit card machine in the town and begins “paying everybody’s debts” with his American Express Platinum Card. Kyle’s mother begs him to stop because he will be in debt for life, but Kyle feels he must to help everybody in the town.

As a subplot, Stan spends most of the episode trying to return the aforementioned Margaritaville mixer. The retailer Sur La Table won’t accept the return because it was bought on a payment plan. He tries to find out to whom he can return it, each person saying the debt has been packaged and sold to someone else (much like real-life mortgage-backed securities). Eventually he goes all the way to the United States Treasury, where a group of associates “consult the charts” and tell him the mixer is worth $90 trillion. One of the three treasury workers says that another insurance company is failing and asks what they should do. They say they have to “consult the charts” again. Stan follows the men inside. He sees a round lit-up gameshow style board. The men cut off a chicken’s head and let the decapitated chicken run on the board while one of them plays Yakety Sax on a kazoo. The chicken falls on the “bailout!” spot, so that is what the men do. In anger at the ridiculousness of the system, Stan breaks the mixer on the platform by the chicken and walks off. The episode ends with a news report giving credit to Barack Obama for the recovery of South Park’s economy, rather than Kyle.

Just what it takes for the troika to finally make a decision on bailing out Greece (or not) is a mystery. Unless the troika all have long orders placed on the Dow Jones index to be executed at sub 9,000 there can be no rational explanation for the continued delay. As each day passes the collateral damage intensifies. Mention of orderly or disorderly defaults are currently rendered redundant as we’ve now entered a new situation were market makers, ‘shakers and movers’ will begin to question the competence and moreover the credibility of the troika. The original support package of circa €110 billion was agreed in 2010, the next tranche of €8 billion is now overdue. Greek officials are insisting that they’ve met the new criteria and quite simply need the bank notes to pay civil service wages and fill up the ATMs.

One aspect rarely discussed is the silent bank runs that have taken place since 2009 which have intensified since 2010. As to whether or not this is a major concern to the troika is doubtful, but the reserves Greek banks hold must be at a minimum, and if and when they’re re capitalised the suspicion might exist that the next rounds of bailouts will come thicker and faster. As each day passes avoiding the bailout the healthy impact will be less as Greece will only experience a very short term reprieve until the question of default raises its head once again. Someone from the troika needs to find a local farm, buy a chicken and start making some decisions if the chicken hits the “bailout spot”.

« The Great Wall of China is a Match for the Wails of the USA Does a dead cat still bounce when it's nine lives are over? »