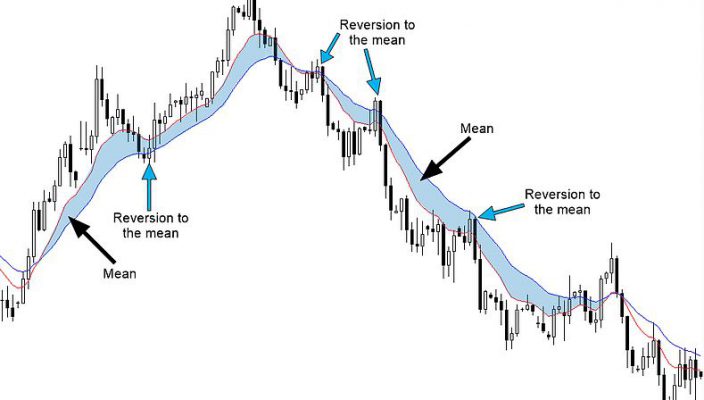 What is Mean Reversion in trading?

In FX markets, mean reversion involves the idea that asset price volatility and historical returns will eventually revert to the long-run average after all data points are considered. Several factors can affect this mean level, including economic growth, volatility of stocks, P/E ratios of stocks, or industry average returns.

It is not only asset prices that are subject to mean reversion. This method can also calculate volatility, earnings, growth rates, and technical indicators. Continue reading to learn how to trade in the financial markets using mean reversion strategies.

What is mean reversion in trading?

According to mean reversion theory, extreme price movements in trading are hard to sustain for long periods, and prices tend to return to average levels over time. Trading mean reversion has led to the development of many methods for capitalizing on the theory.

Their entire bet relies on the notion that an extreme level will return to the average, whether it’s volatility, prices, growth, or technical indicators.

There is also the possibility that the meaning could move up to match the price. The price is now back in line with its average, so it constitutes a reversion to the mean as well.

It is common for prices to revert to the mean regularly, but they rarely remain there for a long time. Mean reversion strategies are discussed below in some famous examples.

In pair trading, two assets with high correlation are chosen. There is an association between the prices of these assets. An example of a potential mean reversion trade is when prices differ, for instance, when one drops when the other does not. Statistical arbitrage is another term for this.

In intraday strategies, multiple assets are bought and sold in a single day, and positions are not kept overnight. Day traders can use a moving average to decide their trades.

The fastest and slowest length of a moving average convergence divergence (MACD) or Percentage Price Oscillator (PPO) used on our Next Generation advanced trading platform can be set to 1 and 2, respectively.

Mean reversions are valuable tools for understanding markets but don’t guarantee profits. We can’t know when prices will revert to the mean in advance, even though they tend to do so over time. A price’s deviation from the mean may continue longer than expected. There may also be a shift in trend direction or a change in the amount or size of price movements. Prices may not automatically fall to the mean just because they are rising; they could also rise to meet the mean.

« Dollar Falls as Powell Hints Approaching Neutral Rate Level What to know about US30? »