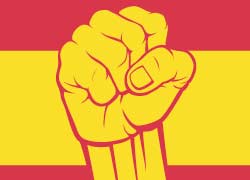 The Outraged, Spain’s Indignados, Protest In Spain, Whilst Iran Turns The Tables On Europe

Feb 20 • Between the lines • 1882 Views • Comments Off on The Outraged, Spain’s Indignados, Protest In Spain, Whilst Iran Turns The Tables On Europe

“Exporting crude to British and French companies has been stopped, we will sell our oil to new customers. We have our own customers. The replacements for these companies have been considered by Iran” – Iranian spokesman Alireza Nikzad was quoted as saying on the ministry website.

Iran has stopped selling crude to British and French companies, the oil ministry of Iran said on Sunday, in a retaliatory measure versus fresh EU sanctions on the Islamic state. The European Union decided in January to stop importing crude from Iran from July 1 over its disputed nuclear program. The European Commission believes that the bloc won’t be short of oil if Iran stopped crude exports, there’s enough stock for around 120 days..

Industry sources confirm that Iran’s top oil buyers in Europe were making substantial cuts in supply months in advance of the European Union sanctions, reducing flows to the continent in March by more than a third – or over 300,000 barrels daily. Iran was supplying more than 700,000 barrels per day (bpd) to the EU plus Turkey in 2011, industry sources said. By the start of this year imports had sunk to about 650,000 bpd as some customers cut back in anticipation of an EU ban. Iran said the cut will have no impact on its crude sales, warning that any sanctions on its oil will raise international crude prices.

EU’s new sanctions includes a range of extra restrictions on Iran going further than the U.N. sanctions agreed last month including a ban on dealing with Iranian banks and insurance companies and steps to prevent investment in Tehran’s lucrative oil and gas sector, including refining.

The largest protests were in Madrid’s Puerta del Sol square, the home base of Spain’s indignados, angry youths who staged several months of demonstrations last year over unemployment and perceived government corruption. Tens of thousands also gathered in Barcelona, Valencia and more than 50 other cities and towns on Sunday..

Changes to Spain’s labor system, approved by the cabinet on Feb. 10, make it cheaper and easier for companies to lay off workers during a recession. Severance packages were cut by nearly a third and companies losing money will pull out of collective bargaining agreements. Employers have greater flexibility to alter workers’ wages, schedules and workloads.

Last month in Brussels, an open microphone caught the new prime minister Rajoy unawares, telling European counterparts he expects social unrest and a general strike in response to his reforms. Trade unions encouraged workers to demonstrate Sunday but they stopped short of calling for a workday general strike.

Greece Works Against The Clock To Finalise Debt Deal
Greece is battling against the clock to implement the drastic budget cuts needed to convince finance ministers from the eurozone to finally sign off its €130bn lifeline at Monday’s crucial meeting. Greece is less than five weeks away from the date when it has to meet debt repayments of €14.5bn, the government of Lucas Papademos worked over the weekend to fulfil conditions demanded by its “troika” of creditors, the EU, European Central Bank and the International Monetary Fund.

Forex Spot-Lite
The yen and dollar dropped versus most major peers in early trading after the People’s Bank of China announced a cut to banks’ reserve requirements in order to spur growth, boosting demand for higher-yielding assets.

The currencies of Australia and New Zealand, which have China among their largest export destinations, gained on prospects the move will increase demand for commodities. The euro advanced for a third day in series versus the U.S. currency before European finance ministers meet amid speculation they are closing on a second Greek aid package. The yen weakened to the lowest since Aug. 4 versus the greenback, Japan is forecast to report a trade deficit as exports fell in January.

« Total USA Debt Reaches New High With $32 bn Borrowed On Thursday Is This What Constitutes 20-20 Vision For Greece? »