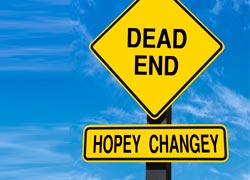 « The Hopey Changey Thing Hasn't Worked Out Betting On A Euro Collapse? Don't Hold Your Breath, Or Your Position Trades »