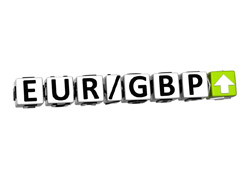 On Thursday morning, EUR/GBP traded more or less in line with the development of the headline EUR/USD pair. The pair traded in the high 0.80 area at the start of trading in Europe. The euro came under pressure early in the session as the Germany PMI disappointed. The UK retail sales were marginally better than expected.

The rebound in sales was basically a setback from a sharp setback last month. Nevertheless, markets were apparently happy that another negative surprise was avoided. EUR/GBP reached an interim low. In line with the global euro performance, EUR/GBP tried to regain some ground around noon, but the move had no strong legs. Later in the session, the sell-off in EUR/USD also weighed on the EUR/GBP headline pair. As we considered the decline in EUR/USD in the first place as driven by global uncertainty, the outperformance of cable over EUR/USD might still be seen as another indication of underlying sterling strength. EUR/GBP closed the session at 0.8043, compared to 0.8085 on Wednesday.

BoE’s Weale suggested/questioned whether sterling had to depreciate further in order to close the UK trade deficit. His comments had no lasting impact on trading.

The UK calendar is empty. So, global factors will have to do the job. For now, we assume that global euro weakness is the ‘by default’ stance on the currency market. This might still filter through into the EUR/GBP cross rate.

From a technical point of view, the EUR/GBP cross rate consolidates following the sell-off that started in February.

Early May, the key 0.8068 support was cleared. This break opened the way for a potential return action to the 0.77 area (October 2008 lows). Mid May, the pair set a correction low at 0.7950. From there, a rebound/short squeeze kicked in. Continued trading above the 0.8100 area would call off the downside alert and improve the short-term picture. The pair tried several times to regain this area, but there were no follow-through gains yet. We still prefer to sell into strength for return action lower in the range.