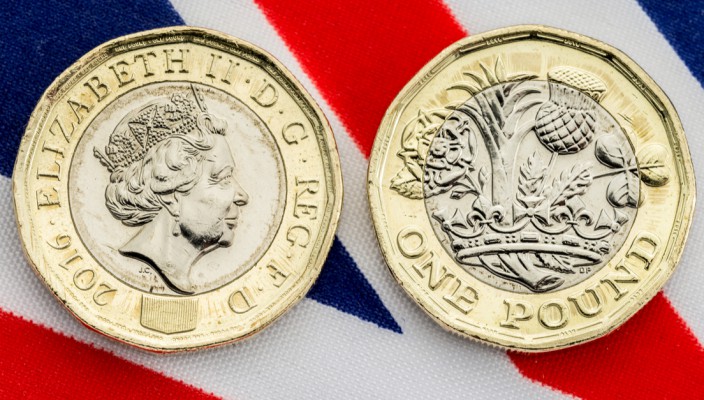 (Reuters) – The British pound jumped on Thursday on a report that Prime Minister Theresa May has struck a deal with Brussels that would give UK financial services companies continued access to European markets after Brexit.

Sterling firmed as much as 0.6 percent against the dollar in Asian trading hours following the report by the Times.

British and European negotiators have reached tentative agreement on all aspects of a future partnership on services, as well as the exchange of data, the British newspaper reported, citing government sources.

“It is still tough to make a directional call on the pound as both optimistic and pessimistic headlines keep flowing around. But I do expect a last minute deal to be clinched before the EU summit in December,” said Sim Moh Siong, currency strategist at Bank of Singapore.

The pound was last traded at $1.2849, up 0.62 percent on the day. It has lost 3 percent versus the dollar over the past three weeks as markets worried over whether Britain would secure an orderly exit from the European Union.

The sterling also clocked gains of more than 0.5 percent each versus the yen and the Swiss franc. The euro lost 0.4 percent versus the pound to trade at 0.8828 on Thursday.

Traders were also looking to the Bank of England’s (BoE) monetary policy decision later in the day.

Economists polled by Reuters expect the nine members of the BoE’s Monetary Policy Committee to vote unanimously to keep rates on hold this month, and on average do not see a further rate rise until May.

“The UK is still no closer to an agreement. They are beyond the critical period of negotiations which means BoE governor Mark Carney will be even more worried about the downside risks,” said Kathy Lien of BK Asset Management.

“As a result, traders cannot count on the central bank to rescue the pound because they’ve made it clear that the outlook for the UK economy hinges on Brexit negotiations.”

Sterling will rise around 5.5 percent against the dollar if Britain and the European Union agree a divorce deal, a Reuters poll found, but will sink more than 6 percent if no agreement is reached.

The dollar index, a gauge of its value versus six major peers moved lower by 0.3 percent to 96.91, easing from a 16-month high of 97.2 hit in the previous session. The leg down was due to the sterling and euro moving higher, which together make up around 70 percent of the index.

The greenback had got a lift overnight after the ADP national employment report showed that U.S. private sector payrolls increased by the most in eight months in October, confirming that the economy continues to grow at a relatively robust pace.

That reinforced expectations for continued rate increases by the Federal Reserve, with a 25-basis-point hike seen in December and potentially two more in 2019.

The yen was up a touch on the dollar at 112.85. The Japanese currency weakened to a three-week low of 113.38 on Wednesday after the BOJ signalled its intention to maintain its ultra loose monetary policy for some time.

Although monetary divergence between the Fed and BOJ gives the dollar the upper hand versus the yen in the medium term, some analysts believe the yen may actually strengthen in coming months.

“This year the yen’s function as a safe haven currency has been diluted by the higher returns on offer from the dollar,” said Jane Foley, currency strategist at Rabobank in a note.

“However, the risk of a worsening in the U.S.-China trade war, slowing global growth and the potential for slowing US growth and a plateauing of Fed rates suggest that the yen could win back some ground versus the greenback next year.”

Rabobank is looking for a move to 110 around the middle of next year.

The Australian dollar moved higher by 0.58 percent to $0.7115 on better-than-expected trade data.