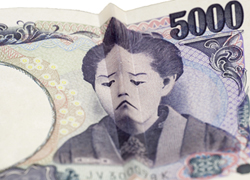 Dollar at 16-month peak, yen weakens as BOJ in no hurry to exit stimulus

Oct 31 • Morning Roll Call • 1241 Views • Comments Off on Dollar at 16-month peak, yen weakens as BOJ in no hurry to exit stimulus

(Reuters) – The Japanese yen edged lower against the dollar on Wednesday after the Bank of Japan signaled it was a long way off from exiting crisis-era stimulus, while the greenback scaled 16-month highs versus its key rivals on continued strength in the U.S. economy.

The Bank of Japan (BoJ) kept monetary policy steady on Wednesday and cut its price forecasts, reinforcing market expectations that subdued inflation will force it to maintain its massive stimulus program for the time being.

In a widely expected move, the BOJ maintained its short-term interest rate target at minus 0.1 percent and a pledge to guide 10-year government bond yields around zero percent.

The yen changed hands at 113.24 on the dollar, remaining under pressure in Asia after earlier sliding to three-week lows at 113.32. The dollar had gained 0.6 percent on the yen the previous day.

“I still see the main driver for the dollar/yen to be U.S. 10 year bond yields and the overall level of risk aversion in the system which can be gauged by the VIX index,” said Sim Moh Siong, currency strategist at Bank of Singapore.

The U.S. 10-year treasury bond yields rose for the third consecutive trading session on Wednesday and were last at 3.13 percent. The 10-year Japanese government bond yield was 0.12 percent, highlighting the wide gap in favor of the dollar.

The dollar index, a gauge of its value versus six major peers, climbed to a fresh 16-month high to hit 97.06.

The U.S. currency benefited from stronger than expected U.S. economic data as well as deteriorating fundamentals for the euro, which makes up around 58 percent of the index.

U.S. consumer confidence rose to an 18-year high in October, driven largely a robust labor market, suggesting strong economic growth could persist in the near term. That follows last week’s data which showed the U.S. economy slowed less than expected in the third quarter.

In contrast, economic data out of Europe disappointed analysts as the euro zone economy grew less than expected in the third quarter.

The euro changed hands at $1.1343, steady from its New York close, though it has lost 2.3 percent versus the greenback in October.

Political uncertainty in Germany, following chancellor Angela Merkel’s decision to step down in 2021, is also pressuring the single currency. Moreover, the stand-off between Rome and Brussels over Italy’s free spending budget, which is in breach of the European Union’s fiscal rules, has weighed on the euro.

Philip Wee, currency strategist at DBS, said in a note to clients that the gloomy backdrop might push the euro down to $1.12 in the current quarter, and is tipping an even lower $1.05-1.10 range in the first half of 2019.

The sterling held close to its mid-August lows, hovering at $1.2705, after credit ratings agency Standard & Poor’s said a ‘no-deal’ Brexit would be likely to tip Britain into a recession on Tuesday.

Some immediate catalysts for the sterling traders could come from the Bank of England’s monetary policy meeting on Thursday, when it is expected to keep interest rates on hold and detail conditions necessary for policy tightening.

The yuan was relatively flat in onshore trading at 6.9663, though it remains on a downward path after it fell to its lowest level in a decade this week.

With no sign of a let-up in the Sino-U.S. trade war, investors are betting on more weakness ahead and expect authorities will eventually allow the yuan to breach the key 7 to the dollar level for the first time since the global financial crisis.

The Australian dollar dipped 0.3 percent to $0.7084 after the release of tepid inflation data reinforced views that a rate increase remains a distant prospect.