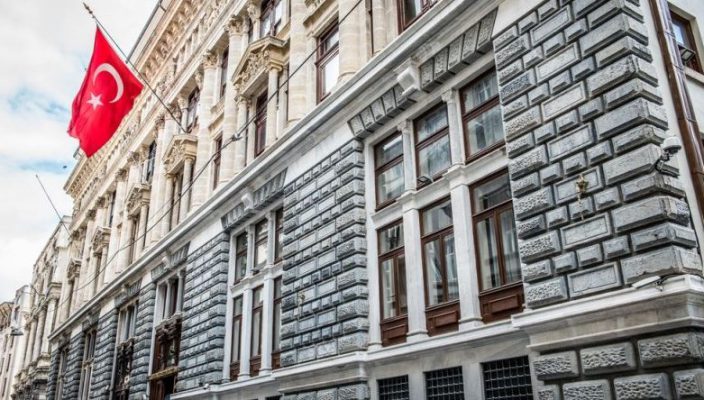 Sooner or later, the Bank of Turkey will run out of dollars

Dec 28 • Top News • 409 Views • Comments Off on Sooner or later, the Bank of Turkey will run out of dollars

The Turkish lira has fallen by almost 8%, and speculators are waiting for the Central Bank to run out of dollars. Lira rose sharply in the past week due to interventions. Traders estimate that government intervention last week cost the central bank more than $ 8 billion

On Monday, the lira fell nearly 8% against the dollar amid continued investor concerns about Turkey’s monetary policy. The lira was up more than 50% last week following billions of dollars in government intervention. Lira also received support last week thanks to government measures to cover foreign exchange losses on certain deposits. On Monday, it weakened to 11.6 against the US dollar before cutting losses to 11.26 by 15.15 Moscow time.

A rally last week brought the Turkish currency back to mid-November levels. However, it fell to an all-time low of $ 18.4 last Monday after months of decline amid fears of rising inflation triggered by a string of interest rate cuts orchestrated by President Tayyip Erdogan. At current levels, the currency is still 35% weaker than at the end of last year.

Erdogan unveiled late last Monday a scheme under which the Treasury and the central bank will recover losses on converted lira deposits against foreign currencies, sparking the lira’s largest intraday rally.

According to official figures that suggested they played little role in the gain, the Turks did not sell large quantities of dollars on Monday and Tuesday last week. Meanwhile, traders estimate that government intervention last week cost the central bank more than $ 8 billion. According to the data, the central bank sold $ 1.35 billion in direct foreign exchange interventions on Dec. 2-3 to prop up the lira when it was around $ 13.5 per dollar.

In an interview with AHaber TV company, Erdogan said the Turks showed confidence in the local currency, and deposits increased by 23.8 billion lira following a plan to combat dollarization. But data from banking supervisor BDDK showed that after a significant accumulation of dollars in the previous week, individual Turkish savers held $ 163.7 billion in hard currency last Tuesday, little change from Monday and Friday when the total was $ 163.8 billion. Dollars.

Last week, the lira received a big boost from what traders and economists called hidden dollar sales by state-owned banks backed by the central bank.

Pressured by Erdogan, the central bank has cut its interest rates by 500 basis points to 14% since September, despite inflation that has surged to more than 21%. Economists predict that prices will rise more than 30% next year, in part due to the depreciation of the lira.

“If possible foreign exchange sales by the central bank diminish, the USD/TRY exchange rate could rise again,” Ibrahim Aksoy, chief economist at HSBC Holdings Plc, warned in Istanbul in a note to investors.

Erdogan’s comments suggest the government is seeking to keep the exchange rate below TRY 9 per dollar, Aksoy said. According to him, the Turks continue to buy foreign currency, despite official assurances. The new mechanism, announced last week, promises that the government will compensate for the losses incurred by holders of 3-12 month lira deposits if the currency falls above bank interest rates.

According to central bank data released Monday, confidence in Turkish producers fell in December, highlighting currency fluctuations. However, capacity utilization rose to 78.7% from 78.1% in the previous month. In addition, Confederation of Labor Turk-Is reported that food inflation jumped 25.8% in one indicator in December.

The Turkish Stock Exchange applied a so-called growth rule for the benchmark Borsa Istanbul 100 on Monday after it rose as much as 5% in early trading. The rule requires short sales to be held higher than the previous trade. As of 13:38 local time, it increased by 1.2%. According to the Ministry of Health, the omicron variant accounts for over 10% of all Covid cases found in major cities in Turkey. Therefore, according to him, there will be no additional restrictions since hospitalizations are not much higher.