Scottish Independence looming over the U.K.

Sep 8 • Extras • 2704 Views • Comments Off on Scottish Independence looming over the U.K. 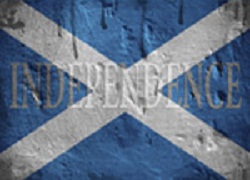 Prime Minister David Cameron’s government and the opposition Labour Party my take a huge hit as talks of Scottish independence increase. Something they never seemed to anticipate.

A deciding vote held by yesterday’s YouGov Plc (YOU) putting the Yes vote on 51% renewed interest from the union to incentivise Scots. 100 Labour lawmakers will now make their way to Scotland this week to put in their No vote all the while Conservative Chancellor of the Exchequer George Osborne gave more power over taxes and spending to the Scottish Parliament to whether voters will choose to stay part of the U.K.

This seemingly unexpected news of the independence campaign moving into the lead arrived while David Cameron was at the Balmoral Castel in Northern Scotland with Queen Elizabeth II.

It was always felt that the Polls would narrow it was quoted by Alistar Darling, the leader of the Better Together campaign who is against the independence.

This historic move would end a 307-year-old union as well as a huge setback for Cameron’s premiership.