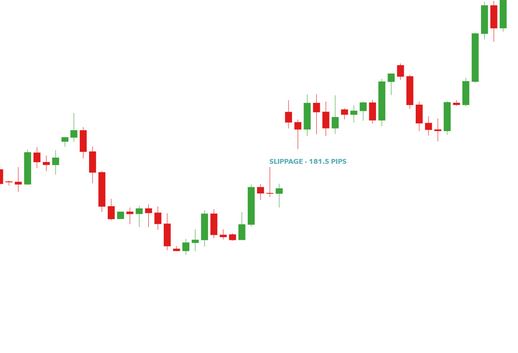 Day traders and investors commonly experience slippage when opening trade at one price and then seeing the order executed at a different price. Slippage is a problem that often occurs in the financial markets.

We will discuss slippage and how traders can avoid it in this article.

In slippage, an order is executed at a different price than when it was placed. The difference might be as small as a few pips in forex but could reach significant levels in stocks and other assets.

In short, slippage occurs when the broker tries to find buyers and sellers for the asset. These transactions usually happen in microseconds due to the way the market works.

Watch out! This could work both in your favor and against you!

When the biggest slippage occurs?

You will likely be exposed to substantial risk if your stop-loss slips when the news is released if you are already in a position when it is released. To avoid trading several minutes before or after announcements marked as significant, check the economic calendar and earnings calendar.

There are many reasons for these differences in prices, including high volatility. When there is significant news or economic data, it causes the market to swing widely. Brokers usually scramble to fill orders during this period, which can contribute to these price differences.

Secondly, slippage occurs as a result of low liquidity in the market. As explained above, the market needs to be active with buyers and sellers. This may be rare, but there are times when there are insufficient participants in the market. There may be a delay when this happens.

How to avoid slippage?

It can be difficult to avoid slippage, but there are several approaches that you can use to minimize it. First, you can avoid volatile periods.

Second, investing in popular assets with deep liquidity is the best way to avoid slippage. For example, if you are investing in forex, you should use popular currency pairs such as EUR/USD or USD/JPY rather than exotic ones.

To avoid slippage, use pending orders, which direct your broker to execute a trade at a specific time if certain conditions are met, such as buying in a limit order or selling in a stop order. The execution of these orders also sometimes suffers a gap, but it is less common than the execution of market orders.

Slippage is a major issue in the market, as it simply refers to a situation in which a price of an asset is executed above or below its initial price. In this regard, you should always be mindful of this before executing any trades. Furthermore, avoid putting your stop loss and take profit very close to where you initiate your trades.