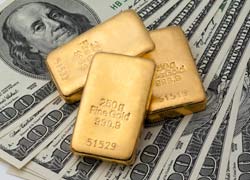 Gold prices have risen as traders speculated that last week’s US unemployment report increased the likelihood that the Federal Reserve would maintain its accommodative policy to boost the economy. The heaviest traded contract, for June delivery, rose $US 13.80, or 0.9 per cent, to close on Monday at $US 1,643.90 a troy ounce. Markets remained quiet on Monday and through the Asian Tuesday morning session.

Volumes are expected to climb as the European markets reopen after 4 day break. The US economy added much fewer jobs than expected in March, the Labor Department said Friday, boosting the view that the Fed would hold to its accommodative monetary policies in an effort to prop up growth. Some investors purchase gold as a hedge against the declines in the US dollar that easy-money policies can bring. The view that the US central bank may be more likely to take new measures after the sluggish gains in employment in March drew buyers to gold Monday.

The door to further quantitative easing remains ajar is the ongoing fantasy of many speculators who now trade the Fed more than they do supply and demand. Bernanke is speaking several times in the next few days. Let’s see if the Bernanke Gold Trading system holds.

Gold prices had climbed to just short of $US 1,800 a troy ounce in just a bit ago, fuelled by the view that quantitative easing was near. But futures retreated as surprising strength in the US economy and comments from Fed chief Ben Bernanke were seen limiting the chance of further central bank stimulus soon.

Futures last week touched their lowest levels since early January. They also tested and retested the 1700.00 price without success.

Sentiment in the gold market was also lifted as jewellers in India on Saturday morning ended their strike after assurances the Finance Minister that the government would consider their request for a roll-back of new taxes on gold imports and sales.

Gold demand should pick up, imports are expected to rise in April and May. India is the world’s top gold importer, and the 20-day strike in protest of the new taxes weighed on global prices. But this will just increase demand and use, and should not affect the price as their usage was already calculated into the price.

Last month, both UBS and Bank of America reduced their gold forecast for 2012.