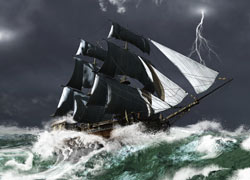 Navigating The US Economic Recovery Through Dangerous Waters

In his address on Tuesday, Fed Chairman Ben Bernanke, made it quite clear that the US economy was doing well, but there were some areas of concern and that the economy was exposed to many outside factors that could derail growth  or cause inflation. In his speech he makes it clear that the Fed would do everything necessary to support the economic recovery.

There are numerous worries and problems that challenge the recovery path of the United States. In the upcoming months the problematic zones, could cause the recovery to end or turn to recession.

China will present major problem with economic slowdown, reduced growth and falling property, questionable accounting standards and banks stuffed with bad loans. Once again, China is turning to protectionism – increasing tariffs and suppressing the value of its currency to keep out US exports. The Administration has shown little inclination to confront these aggressive practices other than through piecemeal WTO complaints, which in total do not yield the systemic improvements necessary to correct trade with China.

US banks are healing, as verified by the Fed’s recent stress tests. Even Citibank is likely in better shape than the Fed estimated – it over weighted the risks associated with Citibank’s large overseas loan portfolio, and failed to recognize the value of international diversification.

After buying up smaller banks that can’t cope with new, tougher regulations, Wall Street banks control more than 60 per cent of deposits nationally, and have driven down certificate of deposit rates. Seniors are losing a lot of purchasing power, and Wall Street banks are less interested in making loans to Main Street businesses than were the regional banks they absorbed.

Oil prices appear to be stabilizing but at a very elevated price. The Obama Administration needs to take decisive action to reduce these prices otherwise inflation will set in and consumers will lose confidence.

The EU is in recession and remains in deep trouble – fixes for Greece, Portugal and Ireland are inadequate and eventually will need to be reworked. Spain has become the main focus at present and Germany seems to be making allowances, but the fiscal pact seems long forgotten.

Higher education loans are a ticking bomb. Undergraduates are borrowing too much against future incomes, and many graduate students are borrowing to obtain degrees that will not markedly improve their circumstances.

Administration efforts to get more young people into school lowers the unemployment rate in the short run, but without fixing the trade deficits on oil and with China, accomplishing credit market reforms, and improvements in Europe, enough decent paying jobs will not be available for many new graduates.

Most education loans are not dischargeable through bankruptcy, and big debt coupled with disappointing pay will become an increasing drag on consumer spending for the next decade. Defaults are on the rise, much as consumer credit defaults are, as the recovery or the weakened economy chugs along more and more Americans are running out of money and are unable to balance their budgets causing defaults. The financial system, is not ready to absorb another shock. Compound this with the growing automobile lease abandonment and the auto loan defaults and increase repossessions. We have a triple threat to the banking system.

Unlike the boom years of the last decade, households will not be able to refinance credit card debt by further mortgaging homes, and consumers simply had to slow down. The notable exception continues to be autos, where an aging fleet helps increase sales, and higher education – much of the recent surge in consumer credit has not been on credit cards but loans to finance autos and higher education.

Our fragile economy has fiends waiting for it at every turn, the Fed, Politicians, the Treasury and the Administration, have a difficult course to navigate over the coming months, with many problems out of our control. It seems that at present the US teams of economic and financial chiefs have actually done an outstanding job, turning things around, much to the surprise of most. Hopefully they can navigate the rapids and the rock shores before so that we can reach clear sailing.