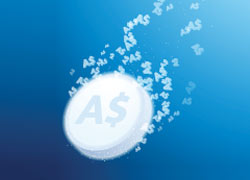 Australian central bank Director Stevens has been under incredible pressure from every lobbyist group and politician in Oz, to do what seems right but in the long run may not be right. Stevens has done a great job, navigating Australia’s, monetary policy and economy through a long rough course.

Now with an obvious slowdown in growth in China, and other economic problems growing in the communist country, its trading partners, countries dependent on business with China for their economic health are also feeling the slowdown, or the pressures of the possible slowdown.

Australia’s economic health and growth is dependent on their leading trading partnership with China and the surrounding Asian nations in the Pacific. Even if Australia is not directly affected by China’s slowdown, its neighbours will be washing these effects onto the white beaches of Oz.

Towards the end of 2011, the RBA instituted two consecutive interest rate decreases of 0.25% each, dropping the key lending rate from 4.75 to 4.25, where it remains. The markets decided that this was going to be an ongoing course for the RBA, and when this did not happen again in January, the markets angered and reacted and since them have blamed every negative economic indicator on the shoulders of the RBA.

During the fall of 2011, real estate investors took advantage of depressed home prices and the lower interest rates to snap up investment property. Once their activity stimulated the real estate market and pushed housing prices up, while interest rates did not continue to fall, they left the market, leaving behind higher home prices and no buyers.

The share markets and the value of the Australian dollar have plummeted recently on the negative news from China and positive indicators from the US. ExReserve Bank of Australia (RBA) board member Solomon Lew has called for a hefty official interest rate cut and accused the central bank of being out of touch. Lew claims the RBA needs to provide further interest rate relief to stimulate confidence in the national economy.

“I really believe that the Reserve Bank has mishandled the mining boom to the great detriment of the non-mining sector, and in particular retail which is one of the key drivers of economic activity,” Lew said today.

Lew, now the Chairman of Premier Investments was speaking to reporters during the retail group’s first half results presentation. The cash rate has stood at 4.25 per cent since December 7, 2011, when the central bank board delivered a 25-basis-point cut.

Lew, who was an RBA board member between August 1992 and August 1997, said the central bank should cut the cash rate by 50 or 75 basis points at its April meeting. “We do need an interest rate cut immediately,” Lew said.

I think the Australian economy is in trouble. The only jobs that are being created are over in the west, basically, and that’s in the mining sector. I don’t see any growth in any other sector at this point in time and I see rising costs. The unions have a responsibility to keep a lid on costs; otherwise they are going to lose a lot of jobs.

In defence of Stevens, and the RBA, one has to remember they have to look at long term effects and overall economic policy and its effects on all industry. If simply cutting rates was the answer it would be a simple solution. I think Mr. Lew, needs to have a long talk with Ben Bernanke.

« Get Out Of The Way Greece, Its Spain's Turn In The Spotlight Negative Sentiment Returned To Financial Markets As The World Slept »