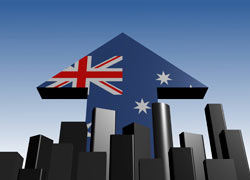 Economic Data Slightly Under Forecast But Shows A Recovery

Applications for home mortgages dropped below forecast in January ending six straight rises, reported the Australian Bureau of Statistics. The Bureau released data today that showed the number of home mortgages in December fell to a seasonally adjusted 1.2 % to 47,768. Applications were expected to have increased by at least 2% this month, based on economists’ forecasts.

Total home loan values fell 2.3 per cent to $20.732 billion. The dollar amount of the loans was expected to fall as housing prices have declined the forecast was a 2% drop. The HIA is hoping that the decline might encourage the RBA to reduce rates but based on the data released today that is not likely The RBA earlier this month held rates at 4.25%

December’s data showed a rise of 2.3 per cent in the number of home loans approved for the month, while the value of housing finance rose by 3.8 per cent.

Real Estate investors have been sitting on the sidelines most of last year jumped into the market towards the end of 2011 and the beginning of 2012 hoping to see continued interest rate decreases. This push in purchases also pushed up housing prices. When the RBA held rates last month, investors moved from the markets but the higher prices remained and have begun to fall again.

January’s data was simply a market adjustment and did not signify overall weakness in the market.

Also just reported was Australian Business confidence, the data shows a slumped in February even though economic conditions have been improving.

Continued worries over Europe’s sovereign debt crisis and the high value of the Australian dollar were dampening confidence, the higher the AUD the more expensive imported products become. Although the Aussie has started to fall dropping last week from a high of 1.08 to trade around 1.05

While the fall was marginal and may just reflect month to month volatility, it is more likely that it reflects some degree of increased concern about the international economic environment and its potential impact on local business activity.

The NBA report indicated that business conditions improved significantly in the wholesale, transport and utilities, recreation and personal services, and manufacturing sectors.

Overall, the Australian economic situation is positive and improving steadily, even though they have been pulled down by economic problems growing in both China and Japan, both are major trading partners.

« Gold Starts The Week Off Lower What Is A Stress Test For A Bank And Why? »