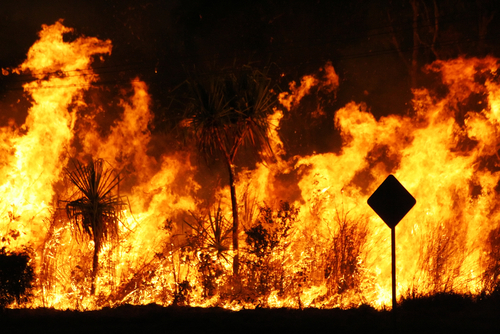 Recreational visitors who trooped to the Angeles National Forest in California were disappointed to be held off by roadblocks owing to a massive wildfire that raged through the weekend and into Labor Day. The wildfire started a stone’s throw away from one of the forest’s campgrounds and spread to over 4,100 acres of forest ground. Visitors and residents remained safe as the fire bore on deeper into the wilderness and away from the mobile home park and the residential community in the area. Unlike the Labor Day wildfire, forex news today does not seem to rage on with much activity. It’s a wait-and-see stance that the US forex market players are taking as several big events are expected to take place towards the end of the week.

Not quite as responsive as the fire fighters in the Labor Day wildfire, forex news reported that traders are not heading to the market today owing to the uncertainty presented by the non-committal statements from central bankers and regulators in the United States as well as in the Eurozone.

The market has been waiting for these central bankers to make their announcements on specific action plans to ease the adverse economic conditions. Forex traders are awaiting four big events namely the central bank meetings of Australia, Canada, Bank of England, and the European Central Bank. Other events that are expected to weigh heavily on the USD include the ECB’s “whatever it takes” strategy and the US labor market reading.

As cautious as the fire fighters were when they approached the Labor Day wildfire, forex news reports indicate that traders should take a more cautious attitude towards trading until these events have been rolled out. The Reserve Bank of Australia is expected to issue a statement as to rumors about interest rate cuts. Meanwhile, financial spectators are keeping watch on the European Central Bank (ECB), waiting to see if it really does “whatever it takes” in order to keep the Eurozone intact. Experts believe that a reduction in the interest rates from .75% to .5% is in the offing. When this happens, the USD will be pushed up further in the positive territory as against the EUR, but not against other currencies.

The US market has already seen how the news of the third round of Quantitative Easing has pushed the USD’s price performance down. After the Fed’s Ben Bernanke’s speech late last week at Jackson Hole, Wyoming, the USD ended the week on a low note versus most of the major currencies. No final word yet has been received as to when and how the QE3 will be implemented. It is still the same lacklustre trend this week, experts and industry experts agree, as the market awaits the release of the labor market reading towards the end of the week. A good showing on the labor front will lead to the postponement of the QE3 and consequently give the greenback a boost. While fire fighters have succeeded in putting out the Labor Day wildfire, forex news followers keep the fire burning even with the waiting game with the world’s biggest central banks.