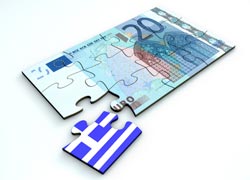 As The EFSF Is Downgraded Is A Greek Default Now Inevitable?

Jan 17 • Between the lines • 4358 Views • 1 Comment on As The EFSF Is Downgraded Is A Greek Default Now Inevitable?

The EFSF, The European Financial Stability Facility, finally lost its top credit rating with Standard & Poor’s after the rating company downgraded France and Austria amongst several other countries on Friday. After European markets closed today S&P cut the rating of the European Financial Stability Facility, the euro-region bailout fund, to AA+ from AAA. S&P had said on Dec. 6th that the loss of an AAA rating by any one of the EFSF’s guarantor nations may lead to the facility being downgraded. S&P stated this evening;

The EFSF’s obligations are no longer fully supported either by guarantees from EFSF members rated AAA by S&P, or by AAA rated securities. Credit enhancements sufficient to offset what we view as the reduced creditworthiness of guarantors are currently not in place.

EFSF has sufficient means to fulfil its commitments under current and potential future adjustment programs until the ESM becomes operational in July 2012.

The government has no reason to believe that the volume of guarantees that the EFSF has now should not be sufficient to fulfil its current obligations. We should not forget that it has been decided to significantly move forward the ESM and to have it in place in mid-2012, one year earlier than planned.

A senior politician in Merkel’s conservative CDU party, Michael Meister, said it was the downgraded countries that should increase their guarantees for the fund.

Germany was not downgraded so our contribution should not be changed. Countries that were affected must contribute more to the guarantees.

A growing number of experts, including a Standard & Poor’s official, are warning a default is inevitable after Greece’s talks with creditors broke down on Friday. EU ‘paymaster’ Germany was insisting new bonds to be given to banks in the planned swap to carry a low coupon of less than four percent, this would increase the banks’ effective losses to 75 percent. The received wisdom appears to suggest that anything below a 75% write down would still leave Greece with mountains of debt that it could not possibly expect to honour. The International Monetary Fund is warning that the Greek economy and the euro zone’s economic outlook have worsened since the Greek bailout package was agreed in October.

Oil (WTI) climbed 1 percent to $99.69 a barrel, the first increase in four days as Iran stated a disruption to supplies through the Strait of Hormuz would cause a shock to markets that no country could manage. The strait is a transit route for a fifth of global oil trade. Gold advanced 0.8 percent as S&P’s ratings downgrades in Europe spurred demand for the metal as a protection of wealth. Copper gained 1.1 percent.

« The UK Is Back In The Recession It Never Came Out Of Trade What You See, Not What You Think »