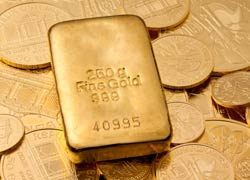 In the beginning of the year, the Indian government increased the duties and taxes on gold purchases. India being the second largest user of gold in the world this increase would generate a huge amount of income for the government.

Many people in India as well as investors and speculators claimed that the only reason that the government had imposed the duties was to fill the hole in the current budget. They also claimed that this increase would not be effective as it would cut the demand for gold and therefore not produce the desired income.

Again two months ago, the government redoubled the duties again, this time placing hardship on jewellery and investors. India traditionally is a culture that accumulates gold, as family possessions and a sign of wealth, and even though it is purchased as an investment, it is not for speculation or resale. Although India is also a major gold jewellery exporter.

In late April, the jewellers close up shop and went on strike. In a country dependent on gold sales, duties and taxes collected on the import and the export of gold, as well as the sales tax on the transaction, this was a great show of strength by the jewellers. The strike lasted for 3 weeks leading up to a major holiday in India where gold buying is a custom.

The strike finally ended right before the holiday, when the Finance Minister promised that the government would review the most recent hike in duties and custom fees.

Today the Indian government rolled back the duties on precious metals like gold, silver etc., thus paving way for a boost in domestic demand. India is the world’s biggest gold market.

The government has decided to withdraw the levy (one per cent excise duty) on all precious metal jewellery, branded or unbranded, with effect from March 17, 2012

The minister has also raised the exemption limit for taxes on cash purchase of Jewellery.

This was an amazing success for campaign by the jewellers and the jewellery association to force the government to back down.

Hoorah for the little guy.