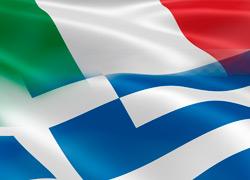 You don’t have to dig too deep to discover the real worry amongst EU ministers. Whilst they’re being extremely coy with regards to ‘allowing’ or actively encouraging Greece to default, that decision has probably already been made. If not then the gambit of pushing banks as far as possible should uncover the banks’ collective breaking point. Losses of 70% are now being mentioned and deservedly so. As to how any authorities allowed Greece to borrow money off the bond markets at 150% in an arena that is supposed to be regulated is scandalous, but it isn’t correctly regulated. If such lenders and..ahem..’investors’ suffer a total loss as a consequence of such unbridled greed then it’ll be hard to shed a tear. However, only Germany appears to be acting as a people’s champion insisting that these losses are not socialized onto European citizens.

The real worry now is Italy. The pathetic and insulting gestures (in letter form) it has made in relation to austerity measures will not go far enough. Italy is currently paying 4% more than Germany to borrow over ten years and that spread will widen dramatically if there is no comprehensive solution put in place, it is the new Greece and only clever public relations and misdirection have caused the mainstream media to be ignorant of that fact. We now have a situation were a country will be described shortly as “too big to fail”…

We are aware of the need to present a comprehensive plan of reforms. We are aware that our debt is too high and our growth too limited. The asset-sales plan will be completed by Nov. 30.

The letter of intent he paraded in Brussels fell short of the comprehensive plan European leaders had sought. Disagreement within his Cabinet over pensions in particular has prevented Italy from complying with EU requests to deliver a blueprint to tackle the euro-region’s second largest debt at the Brussels summit.

In the letter Berlusconi’s cabinet pledged to increase the retirement age to 67 years by 2026. The premier pledged to overhaul labor laws in a country where most young workers have no job security and older workers can’t be fired, how this will dovetail with Euroland’s human rights compliance remains to be seen. The target of 5 billion euros of revenue a year from asset sales will have little impact on a debt of almost 1.9 trillion euros, 120 percent of gross domestic product. Other than pension change and asset-sales, the 14 page letter contained few new proposals. Berlusconi defended his government’s handling of the economy, saying Italy’s budget deficit of 4.6 percent of GDP last year was in line with Germany’s and that the country already had a surplus that would help bring down the debt from next year.

Berlusconi’s Cabinet on Aug. 5 passed an austerity plan aiming to balance the budget in 2013. The announcement of those measures prompted the ECB to begin buying Italian bonds on Aug. 8, helping bring yields down from euro-era records, the country’s 10-year bond now yields almost 6 percent, compared with the Aug. 5 peak of 6.4 percent before the ECB started under-writing the debt.

Markets
The SPX closed up 1.3% on Wednesday, surprising orders for durable goods and improved new home sales helped bolster sentiment. In European markets fortunes were mixed, the STOXX closed down 0.38%, the UK FTSE closed up 0.5%, the CAC closed down 0.15% and the DAX closed down 0.51%. the UK could be benefitting from its isolationist stance versus its European neighbours who have adopted the euro currency. The equity index future for the FTSE is currently up circa 1% as of 1.10 am GMT.

Currencies
The euro fell as European leaders failed to reach agreements with banks for bondholder losses as part of a second Greek bailout and stability for Italy. Demand for the currency was harmed due to confidence in the Eurozone economic outlook dropping in October to the lowest in almost two years. The dollar held up versus the yen, Japanese Finance Minister Jun Azumi hopes for positive news from a Bank of Japan meeting today with regards to weakening the currency. The euro dropped 0.2 percent to $1.3876 as of 8:01 a.m. in Tokyo and fell 0.2 percent to 105.69 yen from 105.93 in New York yesterday, when it rose 0.1 percent. The dollar traded at 76.21 yen after yesterday rising 0.1 percent to 76.18. The pound fell versus the dollar, arresting its previous five days of gains, whilst gilts rose amid concern Europe’s leaders will be unable to find a solution to the euro-region debt crisis. The pound was 0.6 percent weaker at $1.5909 at 4:52 p.m. London time after strengthening to $1.6042, the highest level since Sept. 8. Sterling was little changed at 87.03 pence per euro after weakening to 87.22 pence. The euro slid 0.5 percent to $1.3844. The pound has depreciated 0.2 percent in the past month, extending a 12-month decline to 3.5 percent, according to Bloomberg Correlation-Weighted Indexes.

« Taking a Knife to a Gunfight, the Trillion Euro Sticking Plaster Breathe, Release, Repeat and Party Like it’s 1974 »