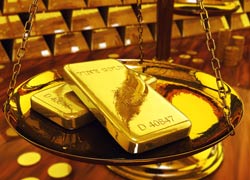 Gold Is Waiting To Shine

The US 10-year Treasury ended below 2% for 5 days in a row.  All the markets seem to be looking for direction, a cue in which to way to begin moving.

Both Spain and France governments got what they targeted though the costs were higher. The yield on the 10-year Spanish debt jumped 34bp to 5.743% since the last auction in January. But the 10-year yield continued to rise after the auction to about 5.9%, approaching the critical 6% area.

The rising yield may bring in more global officials money for intervention. IMF Director, Christine Lagarde who called Europe the “epicenter” of potential global storms today believed she could reach her $400 billion goal of additional IMF lending capacity while the World Bank President, Robert Zoellick stated that the ECB needed to do more for Europe in addition to LTRO.

The expectation of more liquidity coming into the system may have given gold price a reprieve. This was in response to comments from the ECB earlier in the week, that the bank had done all they could, it was now up to the politicians and leaders of the EU.

However, there are more complex factors in play for gold price than just liquidity. In their Q1 2012 gold investment statistics commentary, the World Gold Council (WGC) explained that gold has had a challenging first quarter.

While investors speculated that a U.S. recovery and rising U.S. real rate would cause gold price to fall, the fact that gold demand is no longer just coming from the U.S. and Europe, but from emerging countries such as China and India means that gold price may respond differently to changes in U.S. real rate.

Rising foreign demand for gold signals that gold is not just a dollar hedge but also a global currency hedge. Also gold has acted as hedges against asset deflation and inflation, both likely outcomes of the still-evolving European debt crisis.

While gold price seems to go up and down with equities in the short-term, WGC clarified that gold’s long-term relationship with risky assets, such as U.S. equities, has been hovering around zero historically, which means gold acts as a good portfolio diversifier.

Next Monday’s EU17 PMI data, Akshya Trichina which starts on 24 April and next Wednesday’s U.S. FOMC meeting are key events to watch for gold investors.  Gold should remain close to the 1650 price range through the weekend, awaiting some cue.