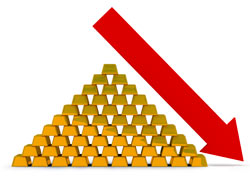 Gold has dropped for a third day as worries about the fallout from a potential Greek exit of the euro zone pushed investors to pile into the US dollar. With little action announced from the EU Summit in Brussels yesterday, investor’s worries continue to escalate. This week the markets have had warning from the OECD, the IMF and the World Bank.

The euro sank to its lowest level against the US dollar since July 2010, as investors continued to shed perceived risky assets on the chance that European leaders would be unable to stem the apparent worsening of the euro zone’s debt crisis.

The European Central Bank (ECB) and euro-zone countries are stepping up efforts to prepare contingency plans for a Greek exit, but these were rumours over the past weekend, with no statements to support the plan.

The most actively traded gold contract, for June delivery, yesterday fell $28.20, or 1.8 per cent, to settle at $1,548.40 a troy ounce on the Comex division of the New York Mercantile Exchange. Futures had traded lower earlier in the day, threatening to end below last week’s 10-month settlement low of $1,536.60 an ounce.

Gold has struggled under the weight of worries that political gridlock after Greek elections could push the country toward an exit from the Eurozone; potentially rattling Europe’s already strained financial system.

Investors have flocked toward perceived safe harbours, particularly the US dollar. That was again the case after a former Greek prime minister said in an interview Tuesday that preparations for an exit from the euro zone are being made. Many of the favoured candidates, either support leaving the euro or allowing Greece to default, some have even tried to blackmail the EU.

Though gold is also viewed by some investors as a rainy day asset, the dollar’s gains have limited that demand for gold by making dollar-denominated gold futures appear more expensive for buyers using other currencies.

Some money managers have also favoured the flexibility of cash instead of precious metals futures in the event Europe’s crisis freezes the financial system.

The days ahead will tell the story, with the Greek election set for mid-June and the next EU Summit scheduled for the last few days in June, markets will be in turmoil for the next 30 days.