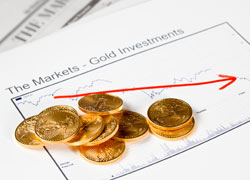 Gold prices declined to $1650 an ounce on to close the month, taking a breather after four day run upwards, as upcoming elections in France and Greece and a European Central Bank meeting later this week pressured the euro versus the dollar. The markets continue to adjust to last week’s disappointing US GDP figures and today’s disappointment from Canada.

The commodity earlier rose as high as $1665.60/oz after data showing the US economy grew more slowly than expected in the first quarter reignited speculation that the Federal Reserve could take fresh measures to stimulate the economy by raising money supply.

Gold speculators awaited a European Central Bank press conference and rates decision on Thursday and US payrolls data on Friday for clues to the next direction of trade.

Gold’s ability to hold above $1620/oz this month, despite several tests of that level, has been prompting investors that the longer-term bull trend is intact.

In addition to profit taking, gold was pressured by concerns that demand from the world’s largest consumer India is in decline as reports said gold sales during the Akshya Tritya festival last week fell sharply compared to last year.

Demand for gold was driven by speculation that the Federal Reserve could consider launching another round of quantitative easing to support the economic recovery after recent US data raised doubts about the strength of the on-going recovery.

More quantitative easing would drive up inflation and weaken the US dollar. Gold is seen as an alternative asset to the American currency and tends to move inversely to the greenback.

Gold will close the month down for the 3rd consecutive month.