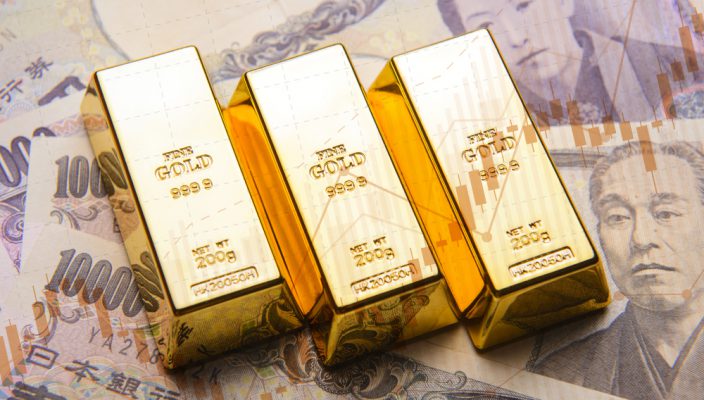 In the overnight Sydney-Asian sessions, on Thursday night/Friday morning, a raft of data concerning Japan’s economy was published. The majority of the readings came in as forecast by Reuters, with industrial production improving. However, Japan’s retail performance fell, both month on month and year on year, whilst construction output slumped by -19.9%, with housing starts falling by -5.7%. Japan’s main index the NIKKEI 225 closed down -1.63%, reducing the year to date gains in 2019, to 2.93%.

Yen rose sharply versus its peers, as its safe haven appeal for currency investors re-emerged, in concert with renewed global trade fears; at 8:40am U.K. time USD/JPY traded down -0.70%, in a wide range, at 108.8, crashing through the second level of support, S2. The major pair is down -1.67% monthly, indicating the overall bearish sentiment which has enveloped markets in general, during the month of May. Yen recorded similar gains against the majority of its peers; rising 0.60% against GBP and 0.40% versus EUR.

Global trade fears have been exacerbated overnight, after President Trump extended his swingeing tariff programme to Mexico, as an apparent punishment for increased migrant immigration into the USA. The decision immediately places the revised North American free trade agreement, into jeopardy. The immediate chaos was illustrated by Mexico’s peso falling in value by -2.99% versus the U.S. dollar.

China’s latest manufacturing PMI came in at 49.4 for May, falling below the critical fifty line, separating contraction from expansion. Analysts will have concerns that such a reading, reveals the impact the import tariffs are having, on China’s manufacturing base and export performance.

The risk off market sentiment displayed over recent sessions, is also evidenced by XAU//USD (gold) rising sharply during New York’s session on Thursday, continuing into the Sydney-Asian session and the London-European session. At 8:50am U.K. time, the precious metal finally reclaimed the $1,300 per ounce handle level, as price breached the R1 level, rising by 0.45%. The Swiss franc also experienced safe haven appeal during the morning sessions; USD/CHF traded down -0.47% at 1.004, EUR/CHF traded down -0.12%. The U.S. dollar slipped in value against many of its major peers, as overall global economic stability is under question; the dollar index, DXY, traded down -0.20%, slipping back below the 98.00 handle to 97.96.

European equities slumped upon open, as the global trade fears extended to all markets; at 9:10am U.K. time the DAX traded down -1.48% and the CAC down -1.09%. The U.K. FTSE traded down -1.08%. The euro experienced mixed trading fortunes; at 9:15am EUR/USD traded up 0.15%, whilst falling versus JPY and CHF. The retail sales figures for Germany published on Friday, painted a confused picture; sales rose 4% year on year up to April, but fell sharply in the month, down -2.0%.

Analysts and FX traders will begin to focus on Germany’s CPI, forecast to fall to 1.6% year on year, when the data is published by Destatis at 13:00pm U.K. time. Italy’s economy has slipped back into technical recession territory, as annual GDP growth came in at -0.1%, with Q1 growth printing at 0.1%.

According to the U.K. Nationwide bank, house prices in the U.K. fell by -0.2% in May, clipping the year on year rise to 0.6%. However, U.K. consumers’ appetite for debt, appears to be showing increased demand. Mortgage approvals rose in April, as did net consumer credit, whilst money supply also increased, according to the latest data published on Friday morning. Sterling experienced mixed trading outcomes during the early sessions, as the current government chaos rolls on, whilst the Brexit spectre still stalks overall investor sentiment, with regards to projections of U.K. economic performance, once the country exits the E.U.

At 9:40am U.K. time GBP/USD traded in a tight range, between the daily pivot point and the first level of resistance; at 1.262, up 0.12% in the early sessions, the rise owed more to dollar weakness across the board, as opposed to sterling strength. EUR/GBP traded up 0.14%, as the daily, bullish price action, threatened to breach R1.

FX analysts and traders concentration will begin to focus on North American data this afternoon, as the latest GDP growth figures for Canada will be published, at 13:30pm U.K. time. The Reuters forecasts indicate a rise to 1.2% year on year, with a 0.7% rise in Q1 2019, with the month of March predicted to show an optimistic 0.3% rise. Such figures if met, could have an impact on the value of CAD, dependent on how the data is received, in light of recent dovish statements from Canada’s central bank Governor Stephen Poloz, after the overnight interest rate was kept at 1.75%.

From the USA the latest personal expenditure and income figures for USA citizens will be published at 13:30pm; income is forecast to show a rise of 0.3% in April, with spending falling from 0.9% to 0.2%, a possible illustration that USA consumers are reining in their spending habits. The core PCE reading is expected to remain unchanged at 1.6%. Later in the afternoon, a slight fall in the University of Michigan sentiment reading is predicted; falling to 101.0 in May, from 102.4. USA equity market futures were indicating a negative open for the New York session; at 10:00am the NASDAQ future price traded down -1.24%, with the SPX down -0.92%.

« Sterling holds close to four month lows, as confusion increases regarding govt. direction, WTI oil slumps, whilst USA market equities recoup some weekly losses. There are no reasons or excuses for blowing up an account, even a demo account. »