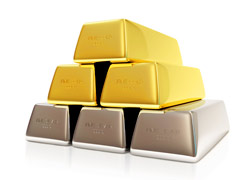 This morning base metals are trading down by 0.03 to 0.71 percent at LME electronic platform while the Asian equities are also trading on a weaker note. Riskier assets including base metals are mostly down on caution ahead of a meeting later in the session by the European Central Bank, which is expected to cut interest rates to a record low, though additional measures may be needed to support base metals. While metal prices may likely remain under pressure by traders cutting long positions given an uncertain global demand outlook, hopes for more stimulus by major economies such as China and Britain to combat slowing growth could put a floor on prices in today’s session.

The European Central Bank may cut interest rates later on the session especially after surveys revealed all of Europe’s biggest economies are in recession or heading there and there is little sign things will improve soon. The shared currency Euro may likely remain pressurized by widespread expectation of a rate-cut to support fragile Euro-zone growth. From the economic data front, the German factory orders may increase slightly after lower CPI and the central banks easing from Europe may support gains in base metals including Bank of England.

However, the US labor releases of ADP and jobless claims are likely to remain weak and may cap much upside.

Further, the MBA mortgage applications may increase after increased home sales and constriction spending while the ISM non-manufacturing may remain weak and may restrict much gain.

Gold futures prices have taken a slight pause at the Globex ahead of the mostly eyed ECB meeting later today By chance the ECB restrict themselves from more easing in reference rate, huge sell-offs are expected in both the shared currency and riskier assets. The same would have been pressurized gold at the electronic platform. The dollar index therefore has the room to rally against the euro.

Going ahead, gold is expected to recoup the earlier losses amid heightened optimism of ECB cutting the interest rate by 25bps with the Bank of England to unveil more easing. Anticipation regarding ECB’s stance and BOE’s policy decision would be steering the market today. Both the central banks are expected to promote monetary easing to fire up the flagging economy. This would be highly anticipated as ECB for the first time is likely to reduce interest rate below 1%. The Euro therefore is expected to revive at the later part of the day. Gold therefore is also likely to recoup alongside the expectation on ECB.

So far the market would have been skeptic ahead of the Spanish bond auctions today. In the evening, the US jobless claims are likely to increase after the manufacturing sector performed badly and thereby payrolls would have been reduced. In fact, the non manufacturing composite may also decline today. The ADP employment change would be less as compared to the prior. All these indicate dollar weakness.

Gold is likely to draw support from the US releases as well. Before that, a most likely rate cut by ECB and extending bond purchase by ECB could lend support the metal to fly high. Silver futures prices have also made a dip at the Globex amid intense anticipation of ECB and BOE taking steps to stimulate the economy. The euro is therefore likely to revive at the later part of the day, supporting silver’s prices.