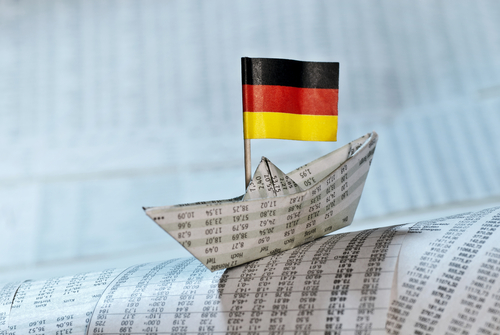 After a recent raft of negative data relating to Germany has been published, combined with economic calendar readings that have missed forecasts, the German economy has finally printed metrics that beat the forecasts, perhaps alleviating concerns that the economy might fall into recession. It must be noted that German data can be impacted by seasonal factors; the factory order figures of -1.6% for December published on Wednesday, weren’t necessarily unusual, the industrial production figure of -0.3% likewise.

On Friday morning Germany’s latest import and export data was released; exports rose by 1.5% month on month in December, whilst imports rose 1.2%. Both metrics beat forecasts by some distance and ensured (year on year) the readings remained in positive territory.

The trade balance and current account surplus for Europe’s engine of growth slipped, however, it must be noted that Germany is relatively unique as one of the top seven G7 economies, in running significant surpluses, as opposed to deficits. Italy’s economy is now officially in recession, diagnosed as two successive quarters of negative growth and on Friday morning the country pitched in with an industrial production figure of -5.5% year on year. France’s manufacturing production is also in negative territory, of -1.0%.

The positive German data broadcast on Friday, failed to impact on Germany’s leading index the DAX, which traded down 0.17% at 8:30am U.K. time on Friday, whilst EUR/USD traded close to flat, at 1.130. Other European equity indices traded down marginally, or close to flat, during the early hours of the London-European trading session. The overall bearish mood of equity market participants, hasn’t been helped by the European Commission downgrading its forecasts significantly for GDP growth, in both Europe and the Eurozone on Thursday. Whilst the Bank of England warned on Thursday that the U.K. could see it’s GDP growth recede to 2008-2009 recessionary levels, if a hard, no deal Brexit, is ushered in.

Adding to the overall gloomy market mood, U.S. President Donald Trump stated on Thursday that he had cancelled any plans to meet with Chinese President Xi Jinping, before the March 1st deadline, a date originally set to achieve a trade deal. The USA trade delegation from the Trump administration, Mnuchin and Lighthizer, are set to restart another round of trade talks in Beijing next week, in order to push for a deal to protect American intellectual property, thereby avoiding a March 2nd increase in the U.S. import tariffs on Chinese goods.

All the main USA equity markets closed down on Thursday, with the three leading indices closing down on average 1%, breaking a recent series of market closes in positive territory. Looking towards the futures markets, the SPX is set to open down 0.30% once the New York session opens. USD/JPY traded flat at 109.8 at 9:30am, whilst USD/CHF also traded flat, close to the 1.000 handle.

The Brexit saga will rumble on in the background, as both sides will now begin to either dig in or concede ground, as the March 29th deadline approaches. The U.K. negotiators still believe the E.U. will relent and remove their insistence over the backstop. Whilst the E.U. have repeated constantly; that the withdrawal offer and agreement reached, is not open for discussion and will not be altered, after taking over two years to finalise.

The practicalities; of grouping the remaining E.U. 27 together this late in the process, in order to change the W.A. are also impossible. Which leads to the conclusion that the only method by which the U.K. can avoid falling off the no deal cliff, is to plead for an extension to A50, based on the country’s government failing to put in place any mechanism to leave in March, that won’t cause chaos at borders. At 9:15am U.K. time, GBP/USD was trading at 1.293, down 0.14%, after closing up during Thursday’s sessions.

The rise of cable on Thursday was entirely due to the false optimism, reported in the U.K. mainstream media, that both sides would reach a revised agreement, rumours immediately quashed by the leading E.U. negotiators. The whipsawing of GBP/USD and other sterling pairs on Thursday, should serve as a reminder to all sterling FX traders, that the currency will prove to be highly volatile and unpredictable, as the actual Brexit date approaches.

On Friday afternoon, the prominent economic calendar events for publication concern Canada. The latest unemployment data and jobs growth data will be revealed at 13:30pm U.K. time. The Reuters forecast is for a small rise in the unemployment rate to 5.7%, with only 5K jobs created in January. The Canadian dollar fell versus its main peers during yesterday’s trading sessions, as the forecast came onto FX traders’ radar. The value of CAD is likely to come under further scrutiny, as the data is released and the market reaction occurs.

« GBP/USD whipsaws in a wide range, as optimism regarding Brexit rises and falls Equity indices slump, as global trade fears resurface How to cope with and trade FX markets when they whipsaw »