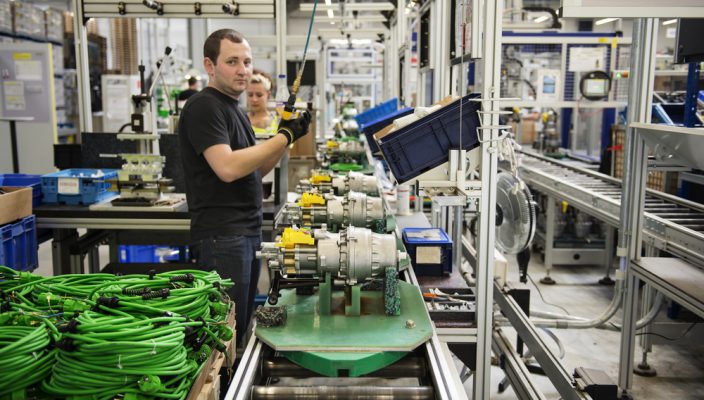 Germany’s latest manufacturing factory orders continued to free-fall according to the latest data reported by Germany’s statistics agency Destatis on Friday morning. Month on month orders slumped by -2.2% for May, year on year orders have fallen by -8.6%. The -4.3% drop in foreign orders during the month is the major cause of concern for analysts. As the engine of manufacturing growth for the Eurozone and Europe, these figures are extremely worrying as they indicate the build up of a severe recession in Germany’s manufacturing sector, which analysts fear could spread to the wider economy.

The current plight of Deutsche Bank isn’t necessarily related to Germany’s domestic economic performance, however, announcing on Thursday a plan to cull the bank’s work force by 20,000 over the short term, hasn’t helped with the overall sentiment towards Germany. The reaction to the manufacturing data was significant for the euro, at 8:30am U.K. time EUR/USD traded in a tight range with a directional bias to the downside, breaching the first level of support (S1) shortly after the data was revealed, to trade down -0.15% at 1.127 and down -0.90% weekly. Germany’s DAX index also dropped sharply, trading down -0.10% to breach S1, giving up the previous position close to the daily pivot point. The contagion of fear surrounding Europe’s economic performance extended to both France’s CAC index, which traded down -0.20% and the U.K. FTSE 100 down -0.22%.

Japan’s yen fell during the Asian session and the early stage of the London-European trading session, its safe haven appeal has reduced since late June as the risk on tone has developed in global equity markets, causing the main U.S. indices to reach record highs over recent trading sessions. Data for Japan concerning the latest leading and coincident indices failed to beat the forecasts when the figures were published, at 8:40am USD/JPY traded at 107.96 up 0.17% breaching the second level of resistance (R2). Yen slipped versus the majority of its peers as did the Swiss franc which has also lost its safe haven lure during the bullish market movement for global equity markets experienced during recent weeks. USD/CHF traded up 0.20% at 0.986 as price breached R1.

The U.K. economic performance has been under the spotlight during the trading week as the various IHS Markit PMIs missed the forecasts by some distance. The services, construction and manufacturing data all missed analysts’ predictions by some distance. As leading rather than lagging data the figures cumulatively suggest that the U.K. economy might register negative GDP readings for the second quarter when the ONS publishes its latest half yearly GDP figures in July. Naturally, the unpredictability of Brexit is being blamed for the cause of the contraction in many sectors.

However, as an economy underpinned primarily by the service sector, including the activity of selling houses to each other for more and more money, house price data is closely watched when it’s published in order to gauge the sentiment of the U.K. populous. The genuine trickle down economic effect house price sales causes is highly significant. On Friday morning the latest Halifax house price index figures revealed a rise of 5.7% annually with a fall of -0.3% in June. Sterling sold off sharply versus several of its peers in the early stage of the London-European session, at 9:00am U.K. time GBP/USD traded down -0.20% at 1.255, breaching S2 and threatening to reach S3. The major pair is down -0.93% weekly illustrating the recent reduction in sterling sentiment. EUR/GBP traded up 0.05% recovering the early session losses.

The major high impact calendar event this afternoon concerns the publication of the latest North American jobs numbers and unemployment rates for both Canada and the USA at 13:30pm U.K. time. The cumulative impact can alter the value of both the Canadian U.S. dollar. Canada’s unemployment rate is forecast to remain unchanged at 5.3% whilst the USA figure is predicted to remain close to the record lows of 3.6%. The NFP reading for June is forecast to reveal the creation of 160K jobs, a significant rise from the outlier figure of 70K created in May. Over recent years the potency of the NFP figure and its ability to alter the value of USD currency peers has significantly reduced. However, the currency will come under intense scrutiny as the data is published, consequently traders would be advised to carefully monitor their positions.

« Gold rises to highest level since February, markets begin pricing in FOMC rate cuts in 2019, FAANGS lose their bite. Wisdom of the crowd »