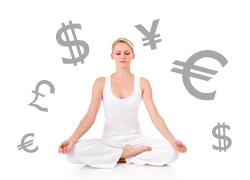 There’s been some fascinating developments in the world of Yoga in the USA lately. As with many activities and pastimes they move in phases and, using our trading terms, yoga broke out of it’s tight range a couple of years back and has stayed above the 200 MA ever since. Yoga is very popular in Manhattan at the moment; time poor, stressed out, iPad chained, Starbucks’ gulping, ‘sex in the city’ power dressing executive women are literary queuing around the block to get to the best classes.

And as with many things in NY tokenism rules, there are a few classes ‘to die for..” But there’s currently a backlash happening versus yoga and it stemmed from the medical profession who have pointed out that this aberration of the principles of Yoga, were folk the length and breadth of the cities in the USA are getting into a form of ‘competitive’ Yoga, can be very damaging.

Witnessing something so pure being ruined by corporatised greed is a perfect metaphor for the irony of our modern age, and only in the USA could their yoga movement have moved so far away from the underlying principles and origins of a discipline that was never meant to be a sport or a way of “getting in shape”.

There’s many laughable ‘face palm’ moments when reading of the ruination of yoga in America, folk tying themselves up in knots and having to be lifted into ambulances, or slipping discs and cracking vertebrae as they go for that “power move”.

Many classes refer to their teachers as gurus and not yogis and you can hazard a guess that a few hundred to thousands of years back the yogis didn’t have one eye on the branding opportunities for a practice that should be more valuable than Facebook. If we valued yoga by the good health and emotional well-being it can create it would be priceless..

Yoga is a physical, mental, and spiritual discipline, originating in ancient India. The goal of yoga, or of the person practicing yoga, is the attainment of a state of perfect spiritual insight and tranquility while meditating on the Supersoul. The word is associated with meditative practices in Hinduism, Jainism, and Buddhism.

The Sanskrit word yoga has the literal meaning of “yoke”, from a root yuj meaning to join, to unite, or to attach. As a term for a system of abstract meditation or mental abstraction it was introduced by Patañjali in the 2nd century BC. Someone who practices yoga or follows the yoga philosophy with a high level of commitment is called a yogi or yogini.

The Sanskrit word yoga has the literal meaning of “yoke”, or “the act of yoking or harnessing”, from a root yuj. A serious practitioner of Yoga (someone pursuing the higher spiritual and religious goals of Yoga) takes upon themselves a life of austere self-discipline common to nearly all forms of mystical and religious life.

The practices that constitute this self-disciplined life are called in yoga yama and niyama. This self-discipline is the ‘yoke’ that one puts upon oneself for the purpose of attaining moksha. An alternative definition is that Yoga is the method of yoking, or unifying, the “lower” (egoistic) personality (those inclinations that in Hellenistic philosophy and Christianity are called passions) to the “higher” via a process of sublimation.

Hatha Yoga
Hatha Yoga, sometimes referred to as the “psychophysical yoga”, is a particular system of Yoga described by Yogi Swatmarama, compiler of the Hatha Yoga Pradipika in 15th century India. Hatha Yoga differs substantially from the Raja Yoga of Patanjali in that it focuses on “shatkarma,” the purification of the physical body as leading to the purification of the mind (“ha”), and “prana,” or vital energy (tha). Compared to the seated asana, or sitting meditation posture, of Patanjali’s Raja yoga, it marks the development of asanas (plural) into the full body ‘postures’ now in popular usage and, along with its many modern variations, is the style that many people associate with the word “Yoga” today.

Hatha Yoga exercises have resulted in severe bodily dysfunction or injury. Practitioners suggest that this is primarily the case when individuals push themselves or are pushed beyond what their physical condition will support.

“So come on where’s the punchline, we haven’t got all day, we’ve got a yoga class to get to”..

OK, I’m sure readers can see I’m headed with this, or maybe not. I’m going to keep it simple. I’m not suggesting that forex traders need to immerse themselves into a total lifestyle change. I’m not suggesting that you venture on a pilgrimage to India, and I’m not discounting the merits of one style of yoga, (Hatha yoga) versus the purity of the origins. Hatha yoga is superb, if practiced correctly and under the right supervision.

The majority of injuries experienced in the yoga classes in the USA have been due to classmates over extending or over exerting themselves, they’ll find themselves next to someone far more proficient in their class and their competitive streak kicks in. Their ego runs wild. They’ll only have the rudimentary basics and knowledge, buy all the gear (when all that’s required is loose fitting shorts and t shirts) and experience a huge blast of initial enthusiasm without realising that the change they require their mind and body to undergo, in order to advance physically and mentally, will take years to even begin to evolve.

Yoga isn’t a ‘get fit quick scheme’ anymore than retail forex trading is a ‘get rich quick scheme’. Both take time and patience to become even moderately proficient. Pushing and contorting yourself into unnatural and extreme positions can be very damaging. Those classmates laid up for months could be likened to fledgling traders who blow up their accounts inside weeks and then have to start from scratch.

The self awareness necessary, the times of solitude, the sacrifice, the discipline and the level of emotional intelligence required to excel are not skills that can be bought or copied. Perhaps with forex trading, as with yoga, unrealistic targets should be abandoned in favour of other more holistic measurements.

The obvious cliche is that the journey is more important than the destination, if you concentrate on your self improvement as a trader then your eventual goal, the destination you arrive at, although it mightn’t be the place you’d originally envisaged in ‘your mind’s eye’, could be the right place for you as you finally ‘find yourself’ as a trader and enjoy success. That journey can’t be rushed, there are no short cuts, you have to be prepared for a slower, arguably ‘lifetime’ process, of learning and change..

« The Original Japanese Expression For Quantitative Easing Does The ‘Buffett Tax Rule’ Belong In The Finger Buffet? »