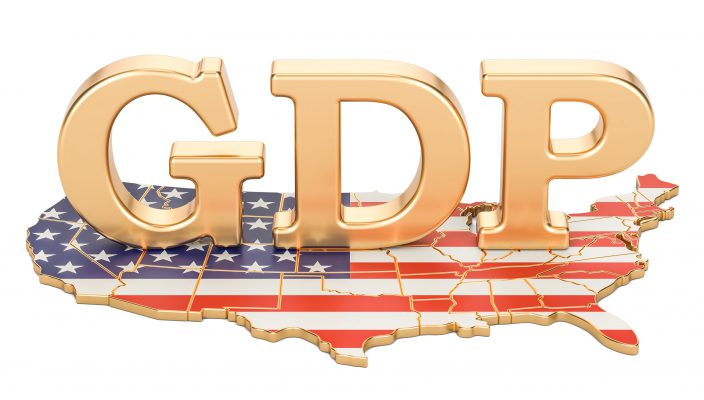 Focus turns to the latest Q2 GDP growth figures for the USA for clues as to the direction the FOMC monetary policy will take.

Jul 26 • Forex Trading Articles, Market Commentaries • 1998 Views • Comments Off on Focus turns to the latest Q2 GDP growth figures for the USA for clues as to the direction the FOMC monetary policy will take.

FX analysts and traders will scrutinise the latest Q2 annualised GDP data for the USA economy when it’s published at 13:30pm U.K. time on Friday afternoon. The expectation is for the figure for Q2 to come in at 1.8% falling from 3.2% in Q1. If the forecast is met equity markets in the USA and FX markets could react in several ways; the figure could already be priced in and despite the fall in GDP investors and traders could simply brush off the reading and continue to attempt to push equity markets higher as the value of USD remains relatively unchanged.

Alternatively, if the severe fall in GDP takes investors and traders off-guard equity markets may rise and the dollar could fall if the immediate translation is that the FOMC are more likely to announce a cut in the key the interest rate from its current rate 2.5% on Tuesday July 31st. At 9:20am the futures markets for USA equity indices were indicating a positive open for the New York session; the SPX was up 0.27% and the NASDAQ 100 up 0.80%. The dollar index, DXY, traded up 0.08% on the day and 1.77% monthly at 97.80, USD/JPY traded up 0.05% and USD/CHF up 0.12% as both major pairs traded close to the daily pivot point.

Unelected prime-minister Boris Johnson ended the parliamentary session on Thursday by delivering his first speech as the leader of the Tory party. After cobbling together the most extreme right-wing cabinet in living memory he immediately destroyed any good-will his predecessor had carefully built up with the European Union, by threatening to Brexit with no-deal and stating that the Irish border issue referred to as the “backstop” must be removed. He also committed to refuse to part with the divorce-settlement money, which is a legal requirement.

Collectively the FX markets for sterling specifically haven’t yet adjusted to this threat on no-deal and it’s damaging consequences for the U.K. economy. GBP/USD and EUR/GBP sold-off during Thursday’s sessions, but the fall owed more to the strength of EUR and USD as opposed to GBP weakness. At 9:45am U.K. time on Friday GPB/USD traded down -0.22% at 124.2 as price traded close to the first level of support, S1. EUR/GBP traded up 0.12% at 0.896 as the cross-pair rejected the 50 DMA breached during recent sessions and threatened to regain the 0.900 handle. The only significant data concerning the Eurozone involved the latest import and export prices for Germany, which both fell sharply indicating that the powerhouse of industry and manufacturing in the Eurozone could be approaching recession.

The euro registered gains against many of its peers during Thursday’s sessions as the ECB appeared to backtrack on its previous commitment to adjust to a more dovish monetary policy during 2019. Instead, the ECB President Mario Draghi committed to maintain the current stance until mid 2020 after the central bank kept the key lending rate unchanged at 0.00%. At 10:10am U.K. time EUR/USD traded down -0.06%, close to the daily-pivot and down -2.00% monthly.

Both antipodean dollars traded down versus several peers during the early sessions, at 9:50am AUD/USD traded down -0.28% as price fell through the first level of support, S1 and NZD/USD down -0.22%, both currency pairs have slumped significantly on a weekly basis due to their commodity-currency status being compromised as a consequence of the uncertainty in the price of WTI oil which is down -5.29% at $56.28 per barrel.

« Euro whipsaws in wide ranges after the ECB’s confusing signals, USA equity markets fall as FOMC interest rate bets fade The observations novice forex traders should record for each and every trade »