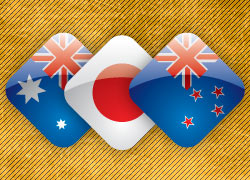 Daily Forex Round Up: Aussie and Kiwi dips, Yen climbs, and uncertain USD

Something surprising happened this Tuesday Asian afternoon, Risk-sensitive currencies slid, and safe havens gained. It took things in the opposite direction after Moderna’s CEO said that it is unlikely that the COVID-19 vaccines will be as effective against the Omicron variant as it has been with other types. The world is in for yet another rollercoaster ride.

According to him, there is no world where (the effectiveness) is the same level as we had with Delta. Stéphane Bancel, Moderna Chief Executive, in an interview with the Financial Times.

The Yen USDJPY gained 0.3%, with one dollar fetching as little as 112.97 yen matching its two-week low hit Monday.

Earlier, the Japanese currency had lost ground. And the antipodean currencies had gained as traders took comfort from very early hints that Omicron might be milder than feared and from remarks by President Joe Biden that the United States would not reinstate lockdowns.

However, the World Health Organization warned of a very high risk of infection surges from Omicron. And other countries around the world have reacted quickly to tighten border controls.

The single currency slumped to a nearly 17-month trough of $1.11864 last week as European Central Bank policymakers stuck to their dovish stance in the face of heated inflation.

The latest reading on the Euro area consumer prices is due later Tuesday.

Even before Omicron’s arrival, the primary driver of currency moves was how traders perceived the different speeds at which global central banks would end pandemic era stimulus.

Along with this, raise interest rates because the traders were looking to combat rising inflation without choking off growth.

In testimony prepared for Congress later Tuesday, Fed Chair Jerome Powell stated that with yet another variant just around the corner, the rate of inflation could last longer than we expected or hoped.

It would potentially speed the need for rate hikes, whereas traders initially reacted to Omicron’s discovery by pushing back bets for Fed tightening because of the risk to growth.

Money markets currently see good odds of a first-rate rise in July, but one is not fully priced until September.

Looming Fed rate hikes had been supporting the dollar.

The dollar weakness we saw on Friday shows that a lot of the dollar strength was a function of Fed thinking and Fed pricing.

If it was any other day, we would have expected the US dollar’s safe-haven credentials to have been prominent. The dollar index DXY , which measures the currency against six major rivals, last traded at 96.075, back near Friday’s low of 95.973, when it suffered its most significant one-day drop since May.