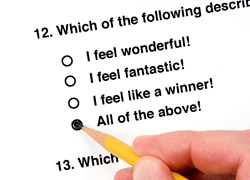 Choosing Our Forex Trading Strategy To Match Our Trading Personality

As many readers will know I’m a swing and or position FX trader. I use the “and or” not as an excuse or to hedge my bets (excuse the pun), but to illustrate that I’m comfortable trading off higher time frames looking for set ups that have good potential for a high ROI. I’m also not that concerned with labels. As I’ve mentioned in previous articles regarding position trading, knowing where to draw the lines on what counts as swing trading and what’s regarded as position trading is irrelevant, particularly if you’re finding success who cares about the terminology?

Similarly scalping has become an all encompassing term in the forex industry to describe trading off low time frames and not as traditionalists (such as myself) would have it as trading to ‘bank the spread’ – lightening quick trades to gain 1-3 pips. I’ve recently experimented with a strategy on the daily frames which assisted me in being able to compile the recent articles on position trading. In doing so I was reminded how comfortable I am placing large stops near to the recent market HH or LL and patiently waiting for the swing to develop to probably go in my favour.

I used a fairly complex hedging strategy across seven pairs, with the exception being I don’t actually ever trade the USD/YEN, I prefer to substitute it with EUR/YEN. When engaging in such strategies I limit my total exposure across seven pairs to 3.5% (0.5% per pair). There are times where I can take a cursory look at the positions and see red, lots of red, each trade underwater in some instances by circa 150 pips. These individual trades are on a knife edge as to whether the alerts I have in place will trigger causing me to close the existing losing trade and reverse direction. I had such a situation on Friday, when the combination of seven pairs was circa 320 pips down and this from a position of bring circa 360 pips up from the Thursday when the trades were taken.

I’d traded from a technical perspective and my trades had been compromised by the apparent good will emanating from the Eurozone two day summit on Friday mid morning. I hadn’t taken a fundamental view on the outcome, I’d traded according to my set-up which had encouraged my predominantly short positions on Thursday. I held the positions through Friday and over the weekend. Yesterday the market sold off, due to the fundamental solvency issues still being prevalent and the rating agencies’ threats to downgrade from AAA still looming.

This made the market come back in the direction of my trades, trades I closed off early yesterday for 565 pips profit, five winners, one loser and one break even. And that’s me finished for this year, I’ll take no new positions until the New Year as previous experience hasn’t served me well in the final two trading weeks prior to the Xmas break..Just watch readers as the market now collapses and I rue the 1000 extra pips I could have banked!

However, my main point is that over the years experience has left me in a comfortable zone were I’ll obey my set up and trading rules no matter what. Witnessing a brief swing of market sentiment, within a longer term trend developing, is a phenomena I’ve witnessed so many times previously that I’m now immune to it. In my earlier trading days having been 360 pips up to then be circa 320 pips down would have caused me major distress, now I regard it as part of the price of doing business on the larger time frames and looking at the charts the reverse in sentiment can now hardly be noticed on the daily time frame with Heikin Ashi candles.

It’s inevitable that as forex traders we experiment with all the indicators, patterns and time frames that come as part of the charting packages our brokers provide, if traders don’t have the intellectual curiosity to experiment then you’d have to question whether or not they’re actually made of the right stuff to excel in our industry. Even if traders go through the full range of experimentation to finally arrive with a naked chart looking for price action only that learning experience is invaluable. That experience as a retail trader could take at least two years to complete. However, I’ll bet that during the voyage of ‘trader discovery’ you’ll be instinctively drawn to certain trading methods and it’s incredibly important that traders shouldn’t ignore those messages..

I’ve contacts in the forex industry who can’t sleep if they have trades on, they view the industry as a contact sport they’re going to do battle with each session. They’re still highly disciplined, strict MM ( money management) and discipline is their cornerstone of success, but they realised they have a personality and personal edge that feels more in tune with their core being if they scalp or day trade, a method that I have used, to moderate levels of success, but don’t prefer to trend trading. What signs we look for in order to determine our suitability is a subject well cover in part two of this article tomorrow..