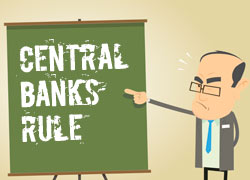 Central Banks decisions will rule the markets this week. We will be hearing from the FOMC, the RNZ and the BoJ. The FOMC has a way of shaking up the markets and I am sure they will live up to their reputation this week. The much anticipated decision of the BoJ will have major effects on the market all week, as investors will be positioning themselves for their interpretations of the Bank Governors comments of last week, when he said that bank would be very accommodating.

The Federal Open Markets Committee Interest Rate Announcement is first up this week.

There is a clear division among the FOMC policy makers on when the Fed should start tightening monetary policy. Some policy makers have called for an exit and rate hikes as early as this year, while a couple of committee members felt that policy accommodation should continue until 2016. With some of the recent U.S. economic data beginning to show signs of weakness and forecasts predicting slower economic growth, it would not be surprising to see the Fed maintaining a dovish stance and expressing a cautious outlook on the economy and the labor market, but stopping short of announcing another round of quantitative easing at this meeting.

However, QE3 will not be completely out of the picture and will remain as a viable option, especially if the occasional soft spots in the U.S. economic data become a persistent trend of deteriorating economic conditions lasting for at least a couple of months. Although additional quantitative easing may not come until the second half of the year or simply not at all, the future fate of the U.S. dollar will continue to depend on QE3 expectations and the Fed’s next move.

Next we will hear from the Reserve Bank of New Zealand.  With the inflation gauge lower than expected, the global economy slowing and the EU debt crisis far from over, the Reserve Bank of New Zealand will not be in any hurry to start hiking rates and is expected to keep the benchmark interest rate at the current 2.50% level. The RNZ will try to anticipate the upcoming RBA move and also interpret the April 3rd decision.

Not until Friday do we get the news from the Bank of Japan on their interest rate decision and statement. Everyone expects that the Bank of Japan will announce additional expansion of its quantitative easing operations, but not everyone is betting on the bank lifting its inflation target to 2%.

Such move would make sense, especially because in February the combination of more QE with a 1% inflation target has proven to be an effective tool in the Bank of Japan’s campaign to weaken the yen. Considering that a decision to make additional asset purchases may be already priced in, the Japanese central bank will need to deliver a “shock and awe” type of an announcement in order to trigger another leg of significant yen weakness.

A failure to do so could see the yen quickly erasing some of its recent losses against the U.S. dollar and other currency majors.