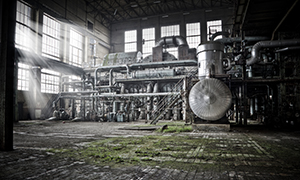 Occasionally we get a sharp reminder, through the fog of information from many sources that streams our way on a daily basis, of just how dire the economic situation is in certain Eurozone countries and just how far they have to go in order to recover from what many analysts still refer to as the "Great Recession". Italy’s credit rating was lowered to BBB, or two levels above junk, by Standard & Poor’s because of expectations for a weakening in economic prospects and the nation’s impaired financial system. However, it wasn't necessarily the downgrade that caused a sharp intake of breath, but the economic data that was part of the downgrade rationale…

Italy’s economic output in the first quarter of 2013 was 8 percent lower than in the last quarter of 2007 and continues to fall, S&P said. The company reduced its growth forecast for 2013 to minus 1.9 percent, from minus 1.4 percent.

Italy wasn't the only country that suffered some appalling economic data on Tuesday.  Despite the UK posting some encouraging economic prints over recent weeks the reality of the difficulties in recovering from a record post war slump were highlighted by the desperately poor manufacturing figures published courtesy of the UK's ONS.

UK's manufacturing in a slump

Production output in the UK fell by 2.3% between May 2012 and May 2013. The main manufacturing components contributing to the fall between May 2012 and May 2013 were the manufacture of machinery & equipment. Production was flat (0.0% growth) between April 2013 and May 2013. Manufacturing fell by 0.8% over the same period, the second consecutive fall this year. It would appear that the UK Chancellor's proud boast that he would encourage "a march of the makers" has fallen flat. The UK's recovery will not be export driven, but a dubious recovery relying on the service economy and imports.

Global growth is projected to remain subdued at slightly above 3 percent in 2013, the same as in 2012. This is less than forecast in the April 2013 World Economic Outlook (WEO), driven to a large extent by appreciably weaker domestic demand and slower growth in several key emerging market economies, as well as by a more protracted recession in the euro area. Downside risks to global growth prospects still dominate: while old risks remain, new risks have emerged, including the possibility of a longer growth slowdown in emerging market economies, especially given risks of lower potential growth.

There were 3.8 million job openings on the last business day of May, little changed from April, the U.S. Bureau of Labor Statistics reported today. The hires rate (3.3 percent) and separations rate (3.2 percent) also were little changed in May. This release includes estimates of the number and rate of job openings, hires, and separations for the non-farm sector by industry and by geographic region.

For all its faults and its 'ability' to buy growth through increasing levels of debt, this continued level of job openings is encouraging. With a population of circa 300ml to have  one percent job openings is quite a remarkable statistic and that's before reducing the number and raising the percentage to apply for only adults in the USA.

The S&P 500 advanced for a fourth day, the longest rally in almost two months. The S&P gauge has climbed 16 percent this year, compared with a 13 percent drop in the MSCI Emerging Markets Index and a 5.3 percent advance for the Stoxx Europe 600 Index.

U.K. stocks advanced, sending the FTSE 100 Index to a five-week high, as mining companies rallied. The FTSE closed above 6500 to close at 6513, up nearly one percent despite the poor manufacturing data.

Gold futures for August delivery added 0.9 percent to $1,245.90 an ounce, inflation in China boosting the appeal of the metal as a hedge, while demand increased for jewelry, coins and bars. Copper fell 1.1 percent in New York. West Texas Intermediate oil reached a 14-month high, gaining 0.4 percent to $103.53 a barrel.

The releases rating as high impact on Wednesday 10th July concern the USA. We receive the FOMC meeting minutes, the results of the USA latest 10 year bond sales and finally the chairman of the Fed, Ben Bernanke holds court. The last detail should not be overlooked as the impact can be considerable whilst certain currencies, indices and energies can experience wild gyrations, in both directions, during the length of BB.'s speech.