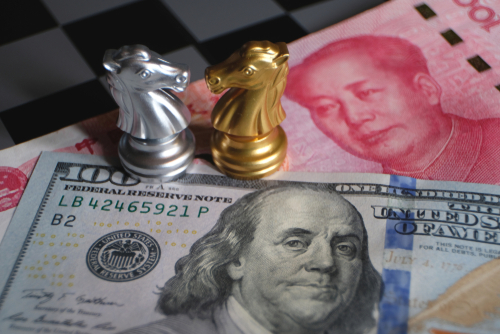 Aussie dollar rises, as yen falls in Asian trading session, due to reports of a USA-China trade breakthrough

The Aussie dollar slumped versus its peers during Tuesday’s trading sessions, as a consequence of the RBA delivering a dovish monetary policy statement, by way of the Governor Philip Low. A statement which accompanied the decision to maintain the cash rate (base interest rate) at 1.5%, a record low, for a record period of inactivity. On Wednesday morning, AUD recovered a significant proportion of its losses, as news began to break via the Financial Times, that the USA and China had made a breakthrough in their trade talks.

What form this apparent breakthrough will take, to save face for Trump and his administration, will be fascinating to witness, as only a removal of the tariffs will satisfy the Chinese authorities. White House economic adviser Larry Kudlow increased the optimism of a potential breakthrough, reporting to the US Chamber of Commerce; “we expect to make more headway. I can’t report any of the details, but it’s a larger, grander discussion than anything we’ve had before in U.S.-China trade relations, and there’s a certain amount of optimism.”

AUD tends to rise if favourable macro economic news is broadcast in relation to China, based on its huge reliance on China as an export market, for its aggregates and minerals, such as; coal and iron ore. At 7:40am U.K. time, AUD/USD traded at 0.711 up 0.62%, breaching the first level of resistance during the Asian session and maintaining momentum as the London-European session prepared to open. Versus many of its other peers, the AUD gains were similar. Whilst the Aussie dollar rose yen fell, due to the risk on market mood which enveloped Asian markets, causing yen’s safe haven appeal to falter; Chinese and Hong Kong equity markets closed up circa 1% across the board, whilst the Nikkei closed up 0.97%, USD/CNY fell by -0.22% to 6.70, as general bullishness returned to Chinese markets.

On Tuesday evening, after prime minister May reached out to opposition leader Corbyn, in a thinly disguised plea to find a route out of the Brexit Parliamentary gridlock, sterling rose reversing the bearish trend, which had developed during the day. Whilst optimism has improved with regards to the process, President Macron of France issued a cautious statement on Tuesday evening, reinforcing the E.U.’s view that any further short extension to the April 12th no deal exit, has to be granted on the basis of a breakthrough, not for May to continue her can kicking exercise.

The opposition leader welcomed the invite, whilst both he and the Labour Party issued statements. However, the move has apparently enraged the ERG section of her party and if it’s a clumsy trap; to share blame for her failure leading to a no deal Brexit, it’s unlikely Corbyn will fall for it. As of Wednesday morning no time is set for the meeting to take place on Wednesday, with only eight working days left, before the no deal exit date, a resolution needs to be found quickly.

At 8:30am U.K. time on Wednesday, GBP/USD traded at 1.318, up 0.44%, as bullish price action caused price to breach the first level of resistance, whilst reaching a high not witnessed since Thursday March 28th. GBP made similar gains versus JPY and CHF. Versus the euro the U.K. pound made gains; EUR/GBP traded down -0.12%, the falls were limited due to the euro making gains versus the majority of its peers, EUR/USD trading up 0.22% at 1.122, as bullish price action caused price to reach the second level of resistance, R2.

General euro confidence was aided by several IHS Markit PMIs, relating to the Eurozone economy, coming in above Reuters forecasts, most notably all services PMIs for: Italy, France, Germany and the wider Eurozone came in above forecasts, as did the composite reading for the E.Z. coming in at 51.6. The bullish PMIs, added to the general risk on momentum created during Asian market trading, helped Eurozone equity indices rise during the early stages of the London-European trading session; at 9:00am U.K. time Germany’s DAX traded up 1.31% whilst France’s CAC traded up 0.83%.

The U.K. services PMI missed the Reuters forecast by some distance when published at 9:30am, coming in at 48.9 for March, falling from 51.3 whilst the composite metric came in at 50, the number separating contraction from expansion. The U.K. is a services driven economy, therefore, this disappointing reading will have heightened fears that the U.K. is facing recessionary pressures, perhaps due to Brexit.

Wednesday’s significant calendar events for the USA include: the latest ADP private payroll jobs numbers, Markit PMIs for the USA and the non manufacturing services ISM composite metric for March. Reuters are predicting a reading of 58, falling from 59.7 when the ISM result is published at 15:00pm U.K. time. The ISM reading is listed as high impact, due to its ability to impact on the value of USA equity markets and the value of USD, if investors are surprised by the release.