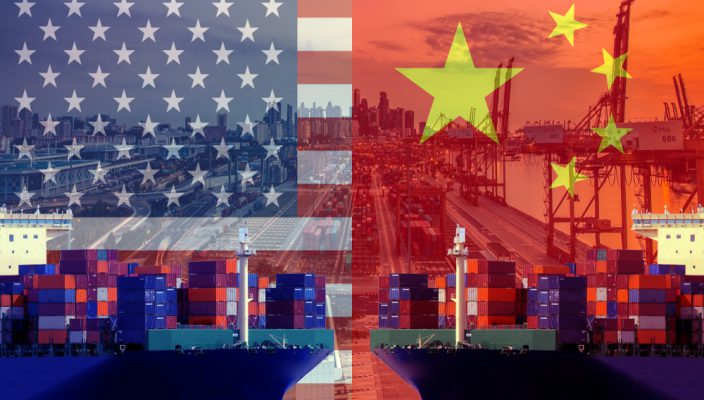 The Aussie dollar fell versus its peers during the Sydney-Asian session, after the Trump administration ratcheted up the trade war rhetoric versus China and Chinese officials stood firm, suggesting they’d offered enough concessions to the USA, but weren’t prepared to shift further. President Trump took to social media over the weekend to reconfirm the USA position, whilst issuing more threats; to increase tariffs to 25% on all imports from China, amounting to circa $550b annually.

At 8:40 U.K. time on Monday May 13th, AUD/USD traded down -0.40% at 0.697, having fallen below the critical handle of 7.000 during May, the major pair is now down -2.82% monthly. The downward pressure on the Aussie dollar, across the board, has been accelerated after a combination of a continuous dovish policy being confirmed by the RBA and the Chinese trade fears extending to the Australian economy, which is heavily reliant on its trade with China. Various economic data relating to the Australian economy missed forecasts, adding to the Aussie dollar bearishness; investment lending in March fell by -2.7%, whilst home loans fell by -2.8%.

Japanese yen continued to attract safe haven investment as a consequence of the China-USA trade and tariff impasse; at 8:55am U.K. time USD/JPY traded down -0.27%, remaining below the 110.0 handle at 109.6, whilst oscillating in a tight range, between the daily pivot point and the first level of support. Before 9:00am yen had registered gains versus the euro and sterling; up 0.33% and 0.10% respectively.

The U.S. dollar has registered significant gains versus China’s yuan over recent days, as the USA administration has dialled up the combative rhetoric and at 9:00am USD/CNY traded up 0.88%, up 2.92% monthly at 6.906. The currency pair is up circa 9.00% yearly and whilst this rise has been in favour of cheaper Chinese imports into the USA, the stronger dollar has hampered any USA export led growth. The USA ran an approximate -$410 trade deficit with China during 2018, a deficit which has continued to rise over the past year, despite the rise of USD versus CNY.  Chinese equity market indices closed down; Shanghai Composite down -1.21% and the CSI down -1.65%.

The futures markets for U.S. market indices were predicting a fall when New York opens, the SPX future was down -1.37% with the tech heavy NASDAQ index trading down -1.68%. The USA tech sector is potentially more vulnerable to tariff issues, given its reliance on new markets and new materials in the manufacturing process. Firms such as Apple may be particularly under threat, based on its heavy reliance on Chinese manufacturing. Apple’s value has risen exponentially over recent years; increasing in value by circa 300% since 2012, it’s therefore highly vulnerable not only to increased competition, but to any barriers to trade.

Sterling traded in tight ranges versus the majority of its peers during the early trading sessions, as Brexit issues have resurfaced. GBP/USD traded close to flat, near to the daily pivot point, remaining close to the 1.300 handle. The major pair often referred to as cable has fallen through the 100 DMA over recent sessions, as price remains within circa 50 pips of breaching the 200 DMA. Market and political analysts will monitor the talks between both the Tory and Labour Party over the coming days, the general consensus is that the talks are about to end, with no consensus reached.

Meanwhile, talk is emerging that prime minister May is determined to head towards Brussels once again, to ask for further concessions on the withdrawal agreement (WA) offer. A Groundhog Day situation and prospect, that many FX traders and investors will despair at. Similarly, Mrs. May appears fixated on bringing the WA to Parliament for its fourth vote attempt, perhaps as early as next week, beginning May 20th.

European equity indices experienced mixed fortunes during the early part of the London-European trading session; FTSE 100 down -0.16%, Germany’s DAX down -0.88% with France’s CAC down -0.67% at 9:45am U.K. time. EUR/USD traded close to flat at 1.123, in a tight range, oscillating around the daily pivot point. The major pair has registered significant gains over recent sessions, reversing the bearish pattern, best observed on a daily chart, on which the recovery since posting 2019 lows in late April can be clearly seen, as price now threatens to reach the 100 DMA, sited at 1.125.

« It’s often stated that “patience is a virtue”, in FX trading it’s essential. Can the trend still be your friend, on several time frames? »